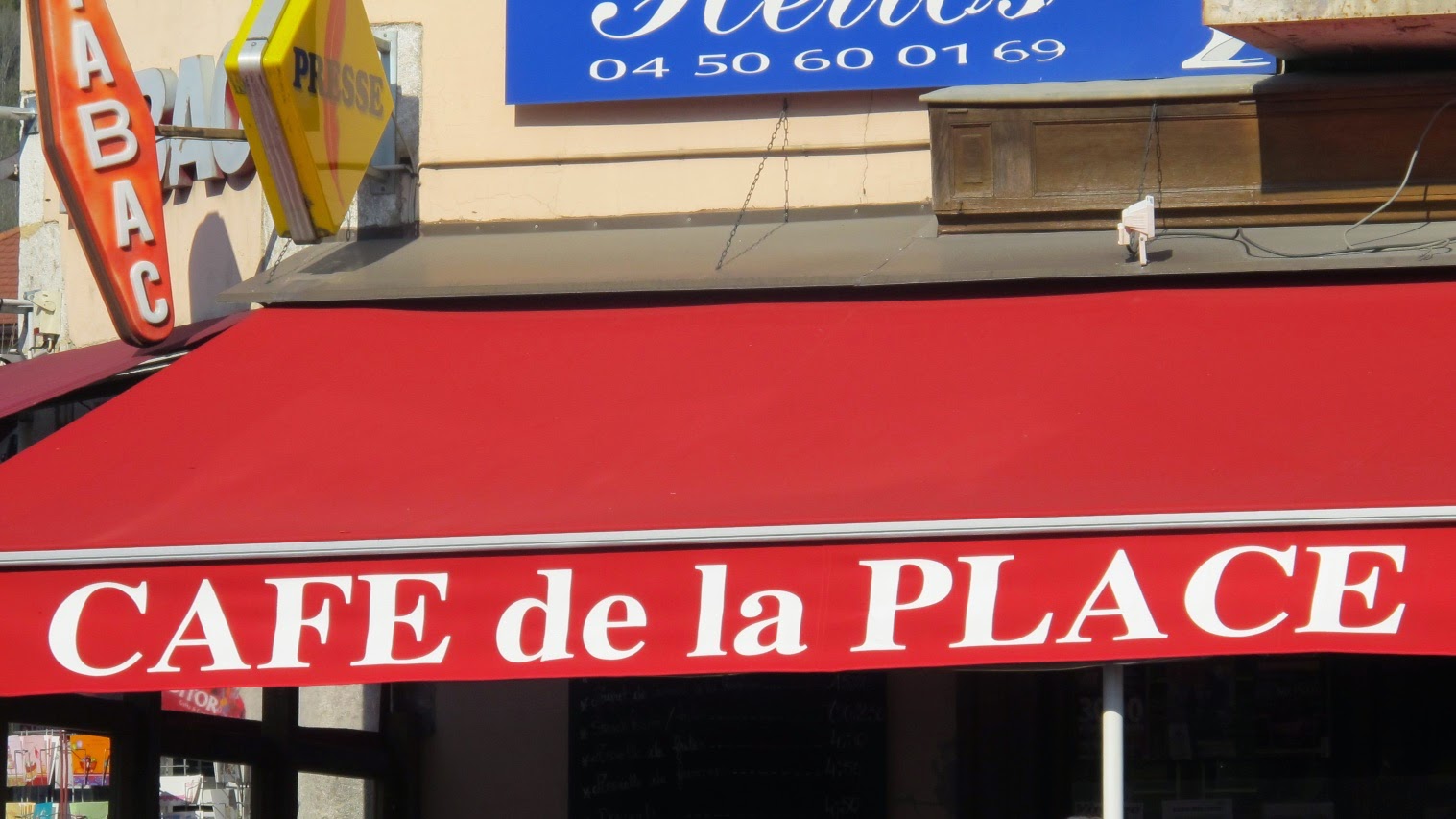 Even before we lived in Menthon-St-Bernard we would occasionally stop at its Café de la Place on the way home from dropping the children at school. Having been up since 5.50 am and then often having had to battle to get the children out the door in the dark plus intensely cold weather conditions and the traffic we could justify a little early morning pause before heading home to the days isolation.

It is always a bit intimidating the first time you walk into a building that is clearly a ‘local’, and our first time in the village café was no exception. Heads turned to look my husband and I up and down, both those who were half-sitting on the tall metal stools, half-leaning on the counter and those who were sitting at the very few but closely packed wooden tables and chairs around the edges of the room. There was a big screen television on the back wall, constantly playing the top 50 songs loudly. It conveniently covered the momentary drop in conversation. We noticed that amongst the crowd there was a gendarme in full uniform chatting casually and several men in bright orange safety vests. The gendarme was having coffee but on the counter there were several half-empty liqueur glasses. As we settled ourselves discretely on the sidelines we watched the orange-vest-clad messieurs finish their alcohol and then walk to the car park where they hopped into their big work trucks and drove off, presumably to handle more heavy machinery. It wasn’t the first time that we wondered about the occupational health and safety practices in France.

But, the cafe had character, a cute name, was warm and we were accepted if not warmly welcomed. So, we went back.

It sits a little back from the main road behind the old stone village fountain that looks like the one that Jack and Jill used to tumble down from in the storybooks of my childhood. No handle to pull up a bucket on a rope but a peaked roof, clear fresh water and low circular stone base. The cobblestones around the fountain lead to the bakery on one side of the café and the newsagent, which stocks all things to do with smoking, so is called le tabac, on the other. The chemist completes the commercial roll call and with its large garish green neon sign lighting up the main road half way to Annecy it unfortunately upsets the natural balance of the square. Actually, it isn't a square at all as the road has cut off one corner but there really is no better translation of the French word ’place’. Every morning in front of the café a blackboard is chalked up with the set meal of the day.  There is a menu but with the blackboard option comprising an entrée, main course, dessert, carafe of wine and coffee all for 12 euro 50 most don't bother reading it.

Last year the café underwent renovations and a big red awning was added to make the outside terrace shadier in the summer and give a bit of protection from the rain and snow in the winter. It has big glass windows from calf height up and being an old building, inside it has exposed stone walls, a wooden paneled ceiling, wooden floors and is quite poky. The awning has only accentuated the darkish ambience of the interior.

By rights it isn’t the sort of place that usually attracts me. So, why did we keep stopping there? No doubt we were looking for somewhere that made us feel like we belonged. To that point we had had very few feel-good moments since our arrival in France and we were spending most days fighting uncomfortable administrative battles. We needed a bit of cocooning.

‘Un café double et un café au lait’ became our standard order. What a shame that the day my husband hopped next door to grab a newspaper and asked me to order for him, not a 'café au lait' but a 'chocolat chaud', the waitress saw me come in and called out "the usual?" "No," I replied, crestfallen and felt sure she would never ask us that question again. 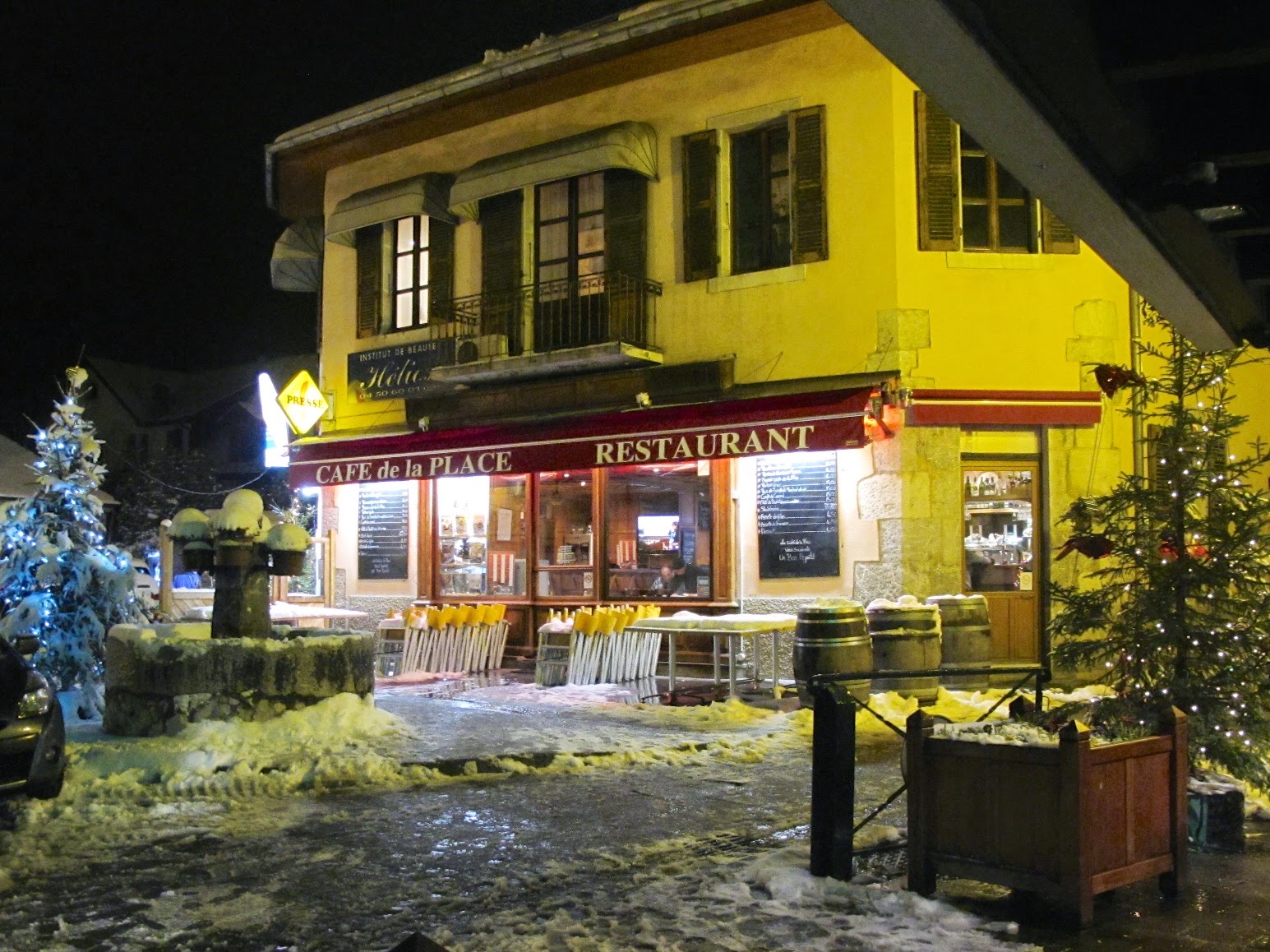 We’ve been back at different times of the day, including to celebrate our wedding anniversary. Meals were not being served so my husband and I had a glass of champagne each instead. Stupidly, I knocked my glass over and broke it so handed over a tip at the counter as I indicated my broken glass. Strangely enough the publican, an enormous guy with a mirthless disposition smiled at me. Were we once again making progress? Did we perhaps just have to show that we were real humans filled with all the usual faults and deficiencies and not just cash happy English speaking tourists passing by and sending loud waves through the peaceful routine-oriented community? Quite possibly, or was he just amused at the unnecessary money outlay which perhaps only served to confirm his previous theory?