The power of the word


A flooded home during a bushfire crisis? Should this have been the hint that 2020 was not going to go to plan?

Rarely is there no-one in my sister's home. Hers is a busy place, with four children, partners, grandchildren and friends all happily bumping into each other regularly, randomly. For the hose under her bathroom sink to burst was in itself rather extraordinary. Don't these events occur every twenty or so years, if ever? For it to do so when all were out, preparing to hold hands and sing Auld Lang Syne was a wee bit mischievous. This; however, was not the adjective that my sister used when, flush with the peace of a day - and night - away, she opened her front door and sloshed through ankle deep water. No slow leak here, this show-stopping soak had pulled out all the plugs at its own private New Year's party.

For those of you who read my blog, you'll know that my last post was a bit impetuous, a lot angry. I wrote, and it helped, but I resisted multiple attempts from the outside world to talk in person, including from my family. I just wasn't ready. A few days ago, months after the bushfire flood event, my sister was finally able to unpack some of her salvaged items. My book was amongst the pile and, before placing it back on to the bookshelf, she paused to flick through the pages.

My phone screen lit up. I picked up and answered, "I was just thinking of you. Thanks for your messages. Are you free to chat?"

It was affirming, reassuring, nice to talk, plus she told me a story. That of my book on her bookshelf.

"You know the section where you were diagnosed ... and you mention that one of your stubborn sisters Skyped you every day even though you refused to look at her and pointed the computer screen at your couch instead?"

"Well, I know that that wasn't me that you were talking about. But, having re-read that, I knew what I had to do. I had to keep sending you messages. I just had to keep trying."

Again, thank you everyone who took the time to contact me after my outbursts here and on Instagram. I didn't always get it right. In fact, without thinking I chose my words badly on one occasion and unthinkingly caused some pain.

It made me reflective. Words are powerful, but bring responsibility.

I couldn't outrun the fear 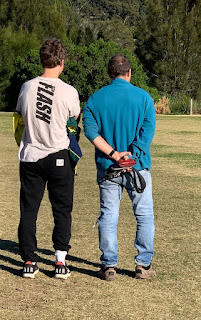 The doctor was having none of it.
"You're heart is beating too fast."
Confirmed shortly thereafter by the triage nurse at the hospital where I was sent.
Too much uncertainty? Too much news? Or my husband's 1st April biopsy for prostate cancer that was no April Fool's.

We were far from family when I was diagnosed with cancer in France.

Cancer, why can't you just stay the #$% away from my family?And, to present during yet another time of family distance...cruel.