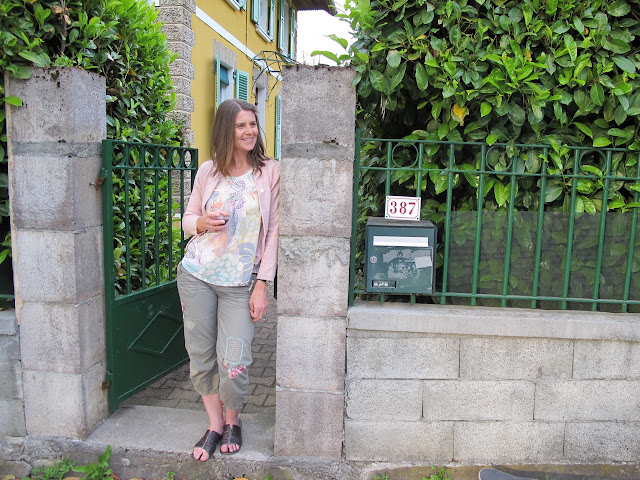 My daughter’s friend from school eats with us every second week on a Thursday. When she is due to come for lunch my usual routine involves picking my son up from outside his school at 11.30am, walking him home, driving in to wait for my daughter and her friend outside their school gates at midday, racing them home, feeding them all a three course meal, cleaning up and then dropping them all back at school between 1.20pm and 1.40pm. Through my Australian parent eyes I would no doubt have scoffed loudly at the idea of children going home for lunch, considered it to be unfeasible for working parents and an unnecessary pampering of the children. Dare I admit that last year they were coming home twice per week to eat plus they were home for lunch and all of Wednesday afternoon?

It certainly puts me under pressure but it does seem to allow us extra time to talk about the perhaps otherwise small details of the day that might be lost in the after-school activity, homework, dinner, bath, bed program that we used to work to in Australia. The children seem more relaxed, smile more and laugh more with each other than I ever remember them doing before.

For my daughter’s friend, who goes home for lunch every day, there is nothing unusual about what we do. She is quiet and easy-going, never fusses about what there is to eat and sometimes comes up with observations that make us realize that in so many little ways life is different here.

One such example was when we were letting ourselves in through the front door. She noticed the letterbox on the wall and asked whether it was indeed the letterbox. “Well, yes,” we replied wondering how that was not obvious. “It is just that you do not have your name on it. How will the postman know where to post your letters?” I had to stop and think about letterboxes in Australia and struggled to remember all the different ones that we had had in the past. As they resurfaced in my memory in all their various shapes and sizes the one thing that they did all have in common was that there was no name on any of them. Wasn’t it enough that the address was on the envelope and that the house number was visible? 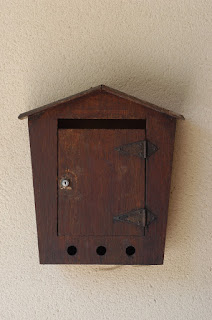 Out walking later I looked around and sure enough all the letterboxes were labelled with the occupants names. To me it was like a sign to burglars declaring how many people lived in each dwelling and it felt strangely unsafe. Many houses in the villages here have no front yards and their front doors open directly onto laneways or footpaths. In Australia there is often a no-mans-land between the front door and the letterbox, which somehow seems to provide a barrier of security. But, even as I write, I reflect on the fact that it was in Australia that we had our house burgled, the car stolen from the road in front of the house, the windows of our flat egged and the car vandalised in our own carpark. Maybe we should have put our name on the letterbox?

Practically, though, it makes sense to provide more details for the postman, as houses are not set out in a regular pattern. In our little hamlet, we are very close to other houses but there is no rhyme or reason to the lay-out of the streets. Moreover, what looks like one big house from the street can in fact be divided into several apartments. I’ve often surmised that this lack of regularity and boundaries between houses leads to a more open, friendly relationship between neighbours.

As my husband and I were walking home today up the hill our always-beaming neighbour was coming out of her shed with a bucket of freshly peeled potatoes, turnips and carrots in water to stop them turning brown. We stopped, exchanged kisses and then had a long chat. As we were saying good-bye and she was once again gathering up her bucket of vegetables to go in and prepare her soup another neighbour came up the street. Down went the bucket, more kisses were exchanged and another conversation ensued. 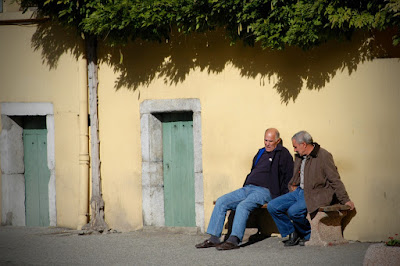 The carpenter from the village has made a bench, wooden of course, which he has slotted into the wall in front of his house, which runs along one of the laneways into the village. It is a good-looking bench and he has affixed a sign near it which reads ‘Banc des amis’ or ‘a seat for friends.’ My neighbour also has an old-fashioned slatted garden seat near the road in her garden. It is next to her shed and when the season is right it has perfumed red roses hanging above it. Hers is not labelled but clearly does not need to be to gather her friends around. 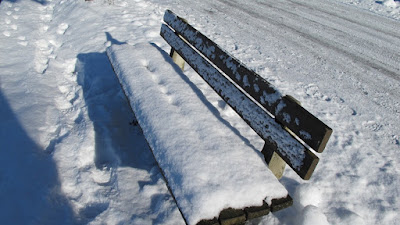 Posted by But you are in France, Madame at 05:32 No comments: 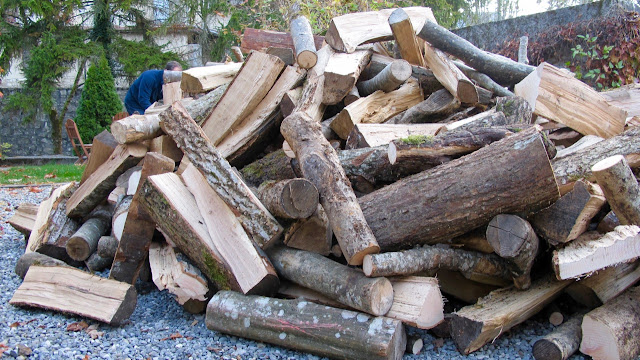 The alarm went off and in my befuddled state I couldn’t remember what day of the week it was. Sunday, why the alarm? Then, the events of the day to come played out in my mind. I happily jumped out of bed. I had a woodpile to stack.

Last night in the pitch-black, bitingly-cold night our wood had finally arrived. I had rung the woodsman four times in the afternoon. Usually I am not that insistent but I really wanted our wood. And, I really wanted to prove that I could do it. Manage that is. But I was doubtful.

For a start he kept saying that he would come and then not be able to make it. He also insisted that the minimum delivery would have to be eight stères (8 cubic metres) whereas I only wanted five. He subsequently rang back to say that another gentleman from around the lake wanted just two so would I be happy with six? Well, five was what I asked for. If he really wanted to make an eight stères trip why could he not tell the other guy that he had to take a minimum of three? After all he bumped me up three why couldn’t he raise the other guy just one? Still it is better to have too much than too little. The first winter taught us that. 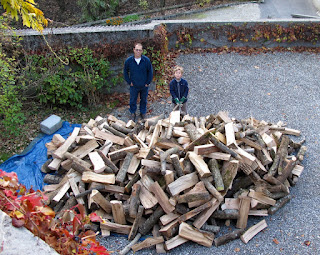 Knowing that he would find it difficult to find us in the dark I waited on the bridge ready to direct him. Standing in the circle of light disseminated by the old-fashioned lamppost breathing out warm vapours, with my hands in my pockets but slightly underdressed for the low temperature, I felt rather conspicuous, but serenely peaceful.  The cold makes things quiet and the quiet makes things peaceful. There was a reassuring glow of lights from inside the houses in our hamlet and shadowy movements behind curtains, which meant that there were people around. I felt safe even though I was on my own. 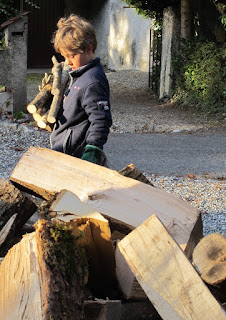 A minor traffic jam occurred when the woodsman arrived as he went past the bridge only to have to back his laden six-tonne truck and trailer up the winding ill-lit old road. He needed reassurance that he would fit down the little passage beside our house. No hesitation. I had had fuel tankers back down the road to deliver our fuel with easily centimetres to spare on each side.

He turned out to be a nice guy much younger and slighter than his gruff voice and less-than-methodical approach to organisation had led me to expect. He manoeuvred his truck into place and dumped the mound of wood expertly into our driveway. It was all over very quickly but as I was handing him his cheque he grinned at me and said “You were waiting for this wood, weren’t you?” “Yes, we were down to our last couple of logs,” I replied. “You were starting to doubt me, weren’t you?” “Uh huh,” I admitted smilingly. And a friendly conversation ensued. He had chosen to bring his truck over the mountains from Magland through Sallanches, past Megève, the turn-off to Les Saisies and down into Ugine before winding his way around the lake. He still had all of that to re-do, this time in the dark and it was already nearly 8pm. I didn’t really mind that he had quoted me two euros more per stères than his Internet site had advertised and that I hadn’t questioned him. I just hoped that if I was being a bit green, that his wood wouldn’t be.

It was too late to stack the wood without making an excessive amount of noise and doing a mediocre job in the dark. So, with a few happy glances at my jumbled pile I retired into the warmth of the house. I had done it. I had found wood when the common consensus was that there was no more to be had around the lake.

Thus it was that I jumped out of bed eager to attack the task this morning. The children, husband and I got the stacking done in a record time at the same time as receiving admiring comments from our passing-by neighbours, both for the size of our pile plus our application to task. It was the beginning of a top-notch day. 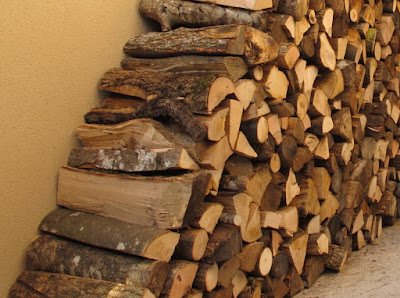 Posted by But you are in France, Madame at 03:53 No comments: