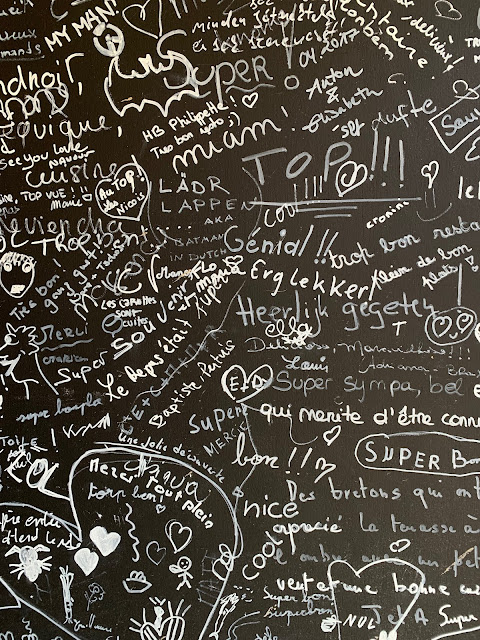 It has been 16 years now and I have only just learnt that what my son and I have been doing all this time has a name: additive bilingualism. The term was coined, I believe, in 2006 by King and Foley and has something to do with raising a child in a non-native language. (I have requested a copy of the research paper but haven't as yet been granted access.) It was in an article entitled 'Possible, but challenging: Raising children in a non-native language' that I came across the term, and it prompted me to think back over the wonderful journey that my son and I have been on.

And, yes, it has been a wonderful journey ... (previous blog posts on the subject can be found here: 'What I have learnt from the past 12 years speaking French to my son followed by Bilingual Baby - First Steps and Bilingual Baby - Chapter Two.) 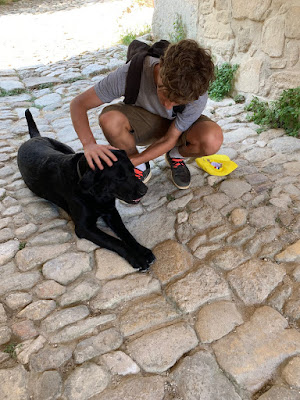 But first, let me share with you a few lines from Gerald Durrell's exquisite read 'My Family And Other Animals'. Believing that he was running too wildly and in need of some proper education, Gerry's Mother set up French lessons for him with the Belgian Consul. Only, in this excerpt, she comes face-to-face with her own language limitations:

"For some inexplicable reason the consul was under the impression that Mother could speak French, and he would never lose an opportunity of engaging her in conversation. If she had the good fortune, while shopping in the town, to notice his top hat bobbing through the crowd towards her, she would hastily retreat into the nearest shop and buy a number of things she had no use for, until the danger was past. Occasionally, however, the consul would appear suddenly out of an alleyway and take her by surprise. He would advance, smiling broadly and twirling his cane, sweep off his top hat and bow almost double before her, while clasping her reluctantly offered hand and pressing it passionately to his beard. Then they would stand in the middle of the street, occasionally being forced apart by a passing donkey while the consul swamped mother under a flood of French, gesturing elegantly with his hat and stick, apparently unaware of the blank expression on Mother's face. Now and then, he would punctuate his speech with a questioning 'n'est-ce pas, madame?' and this was Mother's cue. Summoning up all her courage, she would display her complete mastery over the French tongue.

"Oui, oui!" she would exclaim, smiling nervously, and then add, in case it had sounded rather unenthusiastic, 'OUI, OUI.'

This procedure satisfied the consul, and I'm sure he never realised that this was the only French word that Mother knew. But these conversations were a nerve-wracking ordeal for her, and we only had to hiss 'Look out, Mother, the consul's coming,' to set her tearing off down the street at a lady-like walk that was dangerously near a gallop. 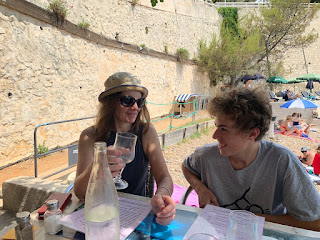 Let's do our own waltzing... back to the present.

I am a native English speaker but I speak French to my son. He, mostly, replies in English. It has always been like this and I'm wondering now if it will always be like this. Not just the English-French mélange, but the forever bit.

The gist of something that I read recently was that, at 5 % prepared, just throw yourself in. If you wait until you are 100% ready, 100% knowledgeable, to do whatever it is that you are contemplating, you will stay still. This was not my guiding principle back then, but it certainly describes what happened. I had very little idea of what I was doing, from both language and methodology points of view, but somehow, together, my son and I managed to push through the awkwardness, the doubt, the difficulties and the lack of resources to an understanding that complements - no, makes magical - our communication.

He is tolerant of (or should that be tolerates? ) me. When I get myself tied up in knots, searching for the words to describe something that does not exist in French, he listens, with an indulgent smile and waits for the excruciating description to finish. He used to cut me off half way. After all, he knew where I was going and didn't need the sentence to be finished to understand. Maturity, and a certain wicked aptitude for teasing, have brought about his new indulgence towards me.

He reminds me, too, when necessary (usually when I am suggesting that he go and do his French homework) that he didn't learn French. It's different for him, he tries to get across to me. French is not his second language. It just is. And that, as beautiful as it is, is hard for me to truly get... both as the mother who has guided him through this - and as a French teacher. I still learn. Every day. And that is something that I don't think researchers have really got. The benefits of additive bilingualism - for the child - are without doubt. The benefits for the parent are all of that and more... 'added additive bilingualism' or some such term. 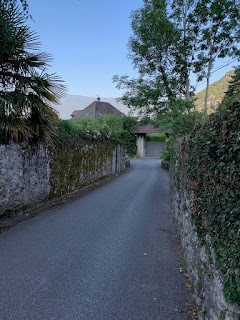 Sure, like Gerry's Mother, I have been known to scuttle into doorways, or cleverly melt into lamp posts, in an attempt to avoid more nerve-wracking language ordeals than necessary, but this somewhat unintentional social experiment with my son has worked (she shakes her head, still in mild disbelief). 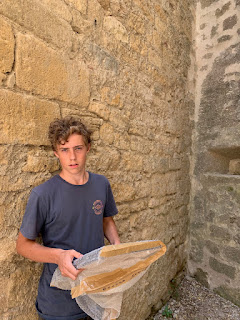 The full title of King and Foley's paper is 'Bilingual parenting as good parenting: Parents’ perspectives on family language policy for additive bilingualism.'

Our journey, my journey, this additive bilingualism, has never been about good parenting. But, boy, has it added soulfully to good living and good loving.

PS Part of our journey took us to France. Find our story here on Amazon for a Kindle or a print copy.

Posted by But you are in France, Madame at 21:43 No comments: