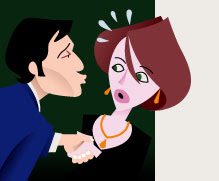 I was asked recently, by someone heading for a short stint in France, if I could think of any obvious cultural pitfalls to try and avoid when she arrived. The need to greet all present before launching into the nitty-gritty of the reason for being somewhere, and the 'bise', (the delightful French custom of greeting by way of a kiss or kisses), came to mind immediately. 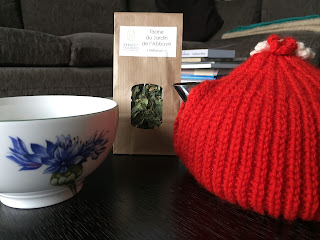 A little later, I was preparing myself a tisane, a herbal tea, made, in this case, exclusively from the plants in the gardens of the Talloires Abbey, when I remembered an awkward moment that I had experienced many years before.


Then, employed by the French government as an English-speaking assistante, my rather vague job description was to help out the English teachers with their classes in two French collèges. It was a nine-month position and, as I was young and carefree, it seemed like an excellent way to experience first-hand living à la française.

As luck would have it, I was posted to Grenoble, where the only person that I knew in France, lived. My friend suggested that she meet me at the train station and take me back to her parents' house for a couple of days until I found my feet. Hugely relieved at the idea, I accepted. Breakfast had finished for the family when I arrived, but the mother busied herself with preparing me a cup of tea ... only the cup was not like any cup that I had drunk tea from before. In my limited experience, soup would have been a more suitable liquid and I looked around for a spoon, thinking that it was strange that no-one in all my years studying French at school and at university had prepared me for drinking tea like the French. But, there was no spoon and I wriggled uncomfortably, hearing my own mother's voice concerning soup-drinking etiquette. "Don't slurp." "Tilt the bowl at an angle away from you and use your spoon to get the last drops." "No, Catherine, do not pick up the bowl with your hands." What was I to do? I procrastinated, waited until my host left the room, grabbed the bowl with both hands, downed the tea and slipped the bowl quickly back in place... precisely as I should have done, minus the haste and embarrassment. 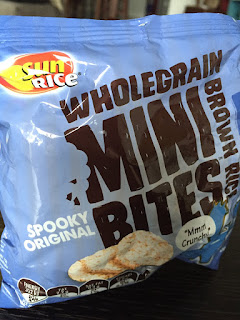 And now, for a bit of cultural confusion in reverse.

Back in Australia, my daughter took a packet of Mini Bites (bite-sized brown rice crackers) to school to eat at recess. Hoeing into them, there was a loud guffaw from the boy to her right. Said monsieur then reached into his pocket for his iPhone. Still laughing, he took a photo to send back to his classmates in France. His language background took him on an altogether different mind journey ...  if further explanation needed click here 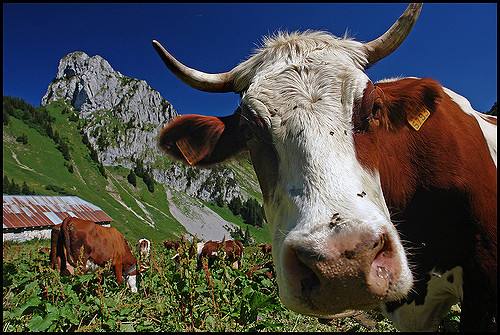 A couple of days ago, my husband was out walking in the mountains behind our house late in the afternoon when he heard the gentle clanging of cow bells. Instinctively, he looked for his phone. No, not to take a photo - he did that later, but to turn off his alarm clock. I had to laugh when he recounted the story to me. To explain...when returning to Australia after living in France and looking for a more pleasant wake-up sound than a jarring 'beep, beep, beep',  he took a sound bite of cow bells and set it as his morning alarm. Even in sight of the large beasts, his sub-conscious did a jolt to another time and response and nearly tricked him into hitting the 'slumber' button.

Back home and tidying up in the garden, he stripped some ivy off one of the verandah posts and uncovered a cow bell that we had hung there and which, over time, had been completely hidden from view. It seemed like the house was offering us a little 'welcome back to France' present. 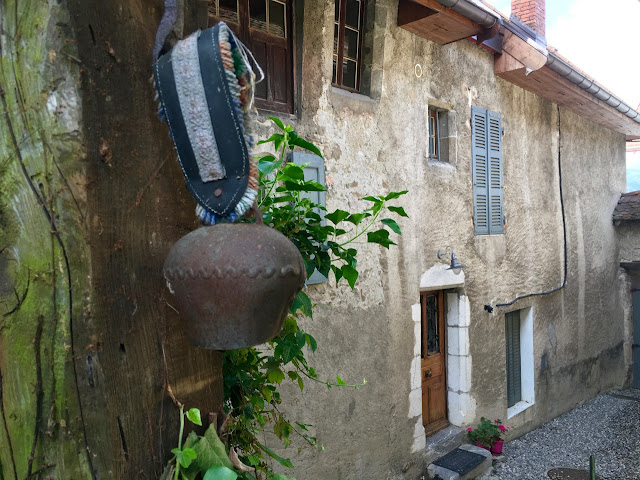 The cows had been a part of our French adventure from the very beginning. Stumbling into an October "Descente des Alpages', in our first year there, we had watched the slowly moving creatures, weighed down by their enormous bells, parade through the streets of Annecy, alongside highly excited geese, necks proudly stretched upright to allow us better viewing of their beautiful bows, groups of disorderly goats reminiscent of the cheeky but loveable souls that can always be found in any school class and pretty donkeys wearing straw hats and flowers. It had been a lucky mistake to be in the middle of it all and, thereafter, the sound of the cows and their bells, which woke us in the mornings and accompanied myself and the children on our daily walks to school, claimed a high ranking in our favourite sounds of the French Alps. 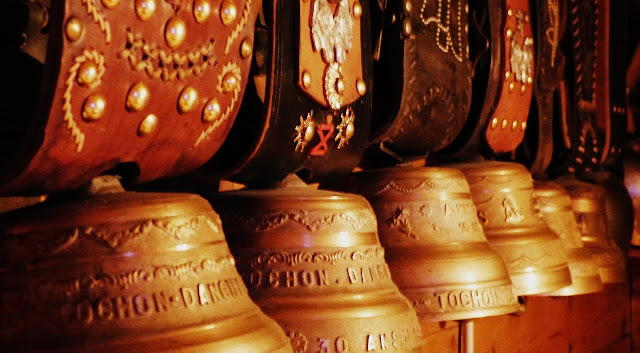 To read more of my family's French adventures, please click here to get your copy of 'But you are in France, Madame'. A Kindle Countdown deal for Amazon UK and USA account holders has just begun.

Hello to readers on Faraway Files. This is my first link-up. I hope it works! 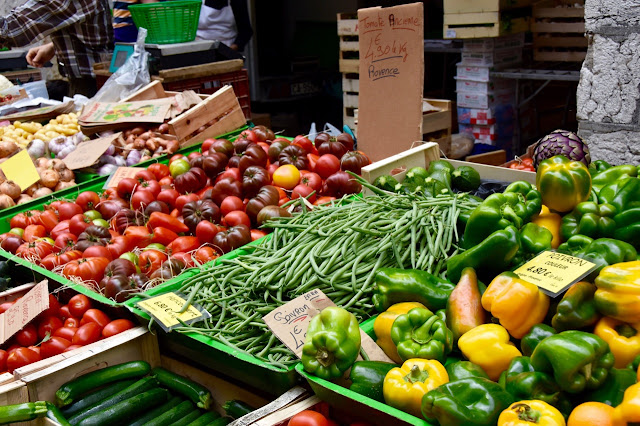 My husband sends me photos like these...and accompanies them with tantalising descriptions of strolling through the Annecy market with the smell of roasting chickens, their potatoes swimming in rather large quantities of fat underneath, floating in the air. 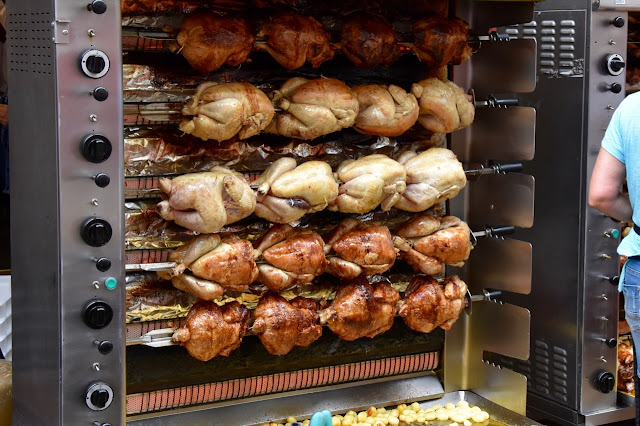 He's there and I'm not, more's the pity.

And, the cheese ... I still remember my surprise when first I discovered that you could buy cheese, like wine, by its year. It was in our early days in Annecy when I was still rather over-awed by the speed with which market transactions took place and the amount that I did not know about good, fresh, locally produced food. No doubt it was just to bring me back to that pleasant moment of discovery that my husband lashed out and bought a slab of 2014 Summer Beaufort, alongside the Tommettes Fermières pictured. 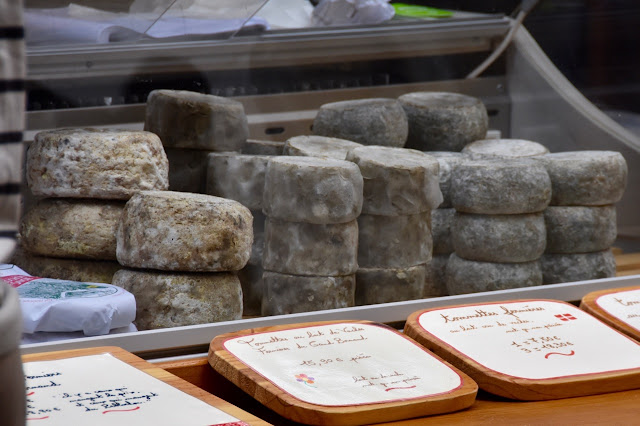 As an aside, the Tomme de Savoie (the tommettes above are smaller versions of the Tomme) is celebrating its 20th year since being awarded an IGP (Indication Géographique Protégée). If you are a cheese lover, it is at this must-visit site http://www.tomme-de-savoie.com (excerpt below), dedicated to this cheese, that you will be regaled with recipes, health facts, production secrets and more. 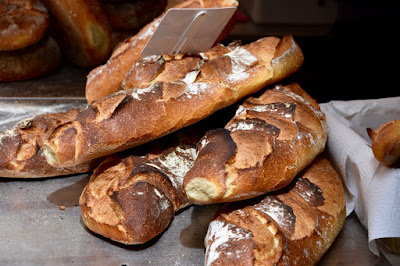 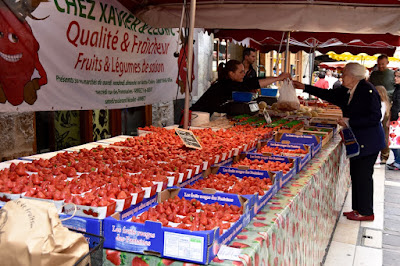 To the delightful aroma of the roasting chickens add the look of the bread, the smell of which I can imagine from the other side of the world, the anticipation of the rows and rows of strawberries, the baskets full of a mixed variety of tomatoes, the crazy shapes of the capsicums and the sweetest mini rockmelons anywhere and you have just another normal day at the markets in France...lucky, lucky husband. 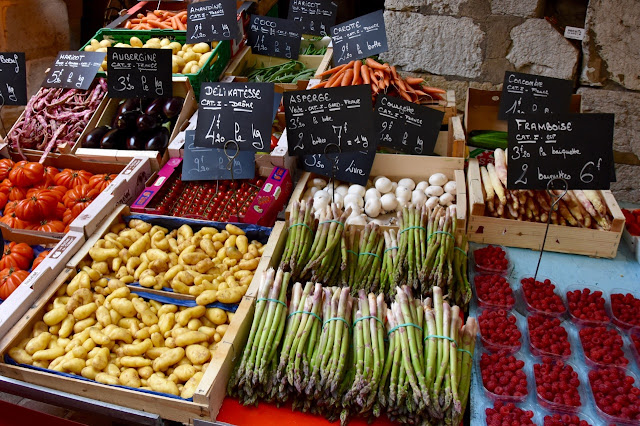 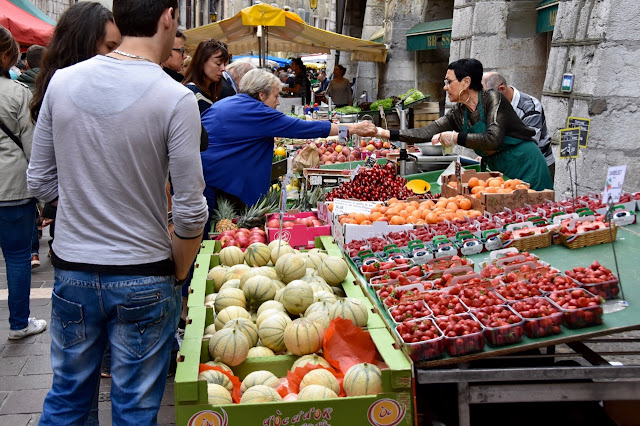