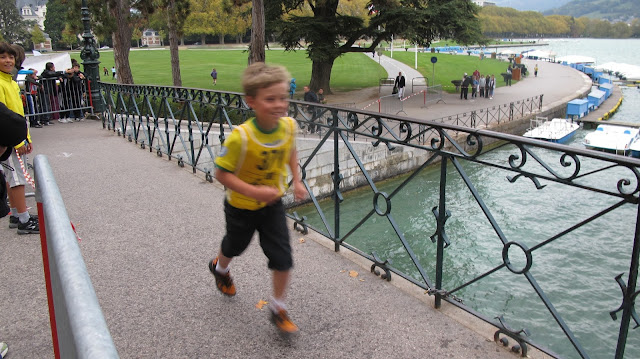 I got hooked on running when I was a little girl. I was of average height, skinny with long feet and I could run for kilometers. Joining a club was financially out of the question, so I did laps of the block after school. It was a big block and I ran on the footpath, which went past the primary school and down a tiny path across a low-lying bridge. I hated that section as it was isolated and I had visions of being ambushed or confronted by one of the three billy goats gruff. It made me work hard to get up the hill on the other side and as I did ten or so blocks several times a week it kept me very fit.

A friend’s mother had South African origins and had been a good enough hurdler to qualify for the Commonwealth Games. She took my sisters and I under her wing and encouraged us to train for fun runs on the weekends. She would set us time and distance objectives for when we were running at home during the week and when we had sleepovers at her place we would set off early in the morning when it was still quiet and cool and run in the National Parks. After we had finished our long training run she and her husband would design obstacle courses for us, under and over logs, around bushes, through play equipment, if there was any, and time us to see who was the quickest. We would go home exhausted and happy. In fact I would count these mornings amongst my most treasured childhood memories. 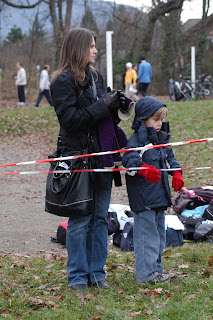 I wanted to pass this love of sport on to my children and so from when they were very young we would avoid the car and walk as often as possible. My first child had to give up her pram for the second and then the second refused to stay in it as soon as she was capable of walking. So, we were off to a good start. Little Athletics in Australia then really made the difference. Every Saturday morning during the summer season the children would head up to the outdoor running track and in the winter season to a designated cross-country venue. There, they made great friendships and learnt about coping with losing and winning, being part of a team and trying to beat their personal best.

I looked around for an athletics club for the children when we arrived in France. Due to the approaching winter the training sessions were initially all indoors. They were geared both to fitness and learning about the different track and field events, but the one thing that was missing was the competition. By chance I saw an advertisement for a weekend cross-country run half way between our house and Annecy and made enquiries at the tourist office. That was two years ago and yesterday marked our third participation in the same event. Unlike the first year when we arrived and understood nothing about where it was to be held, how the children were to collect their competitors' bibs and where they were to start from and run to, yesterday we felt like old hands. For a start we weren’t a lonely group of foreigners trying hard not to raise our voices with each other as the stress of working things out was working us up. We knew people and we knew what to do.

As a child and young adult my different sports had me sliding around in mud on the hockey field, playing on rain-soaked fields that made it difficult to even see the hockey ball and toasting on the tennis court in the reflected burning rays of hot summer days. But, I never had to tackle snow and temperatures below zero like my children have now had to do here. In these conditions warming up and keeping warm before the start of a race is difficult but essential and beanies, gloves and long-sleeved tops and bottoms are commonplace before and during a race. We had also never come across the French habit of restraining the youngest runners behind a rope for the first couple of hundred metres of their already very short seven-hundred metre race. If it wasn’t so dangerous it would have been funny. In attempting to make things safer the children got more agitated, pushed more, fell more and were then stomped over whilst the adult runners, holding the rope and moving forward at a snail’s pace at the front, continued on obliviously. 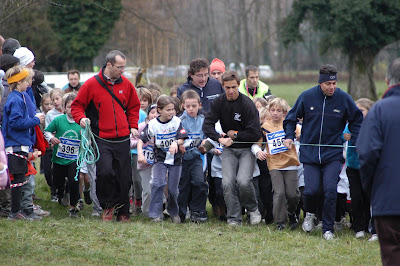 None of this mattered by the time that the hundreds of children had been cattle-herded through the finishing gates to get their prizes; A medal of course, for participation but also a goody bag of odd not-necessarily-sports-related articles. A friend who came second in the veterans category found a wood-turned bowl and a multi-tiered letter and bill stacker in her prize bag to take home! My children were more fortunate with trendy white woollen beanies or black gloves to choose from. 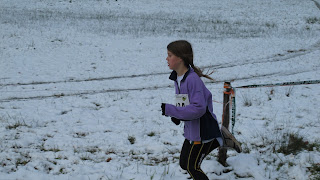 We know now to expect organisational differences but one thing that we haven’t had to adjust to and that doesn’t change from one side of the world to the other is the euphoria of putting yourself to the test and the sense of accomplishment that comes from participating in, and finishing a race. Three mud-spattered, cold, tired but happy children hopped in the car yesterday to head home. I recognised the feeling. 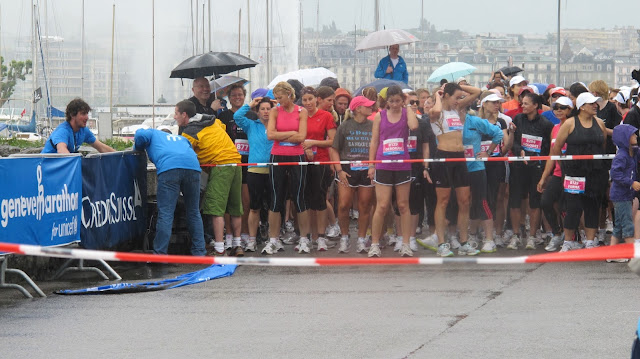 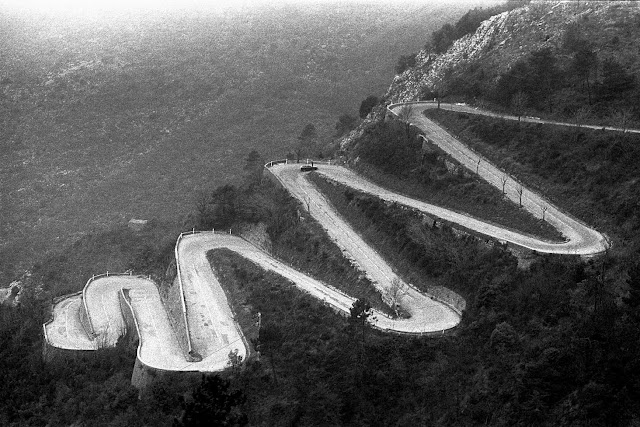 I didn’t like it but I was becoming more used to men and women beeping me when I was driving, shaking their fists and tailgating me to the point of feeling like they were in my car with me. It was not that I drove slowly I just tried not to go above the speed limit, including in the villages around the lake where 30 kilometres per hour was the maximum allowed. This frustrated a lady who was driving a powerful black car behind me through the village of Veyrier-du-Lac. But, I was not inclined to go faster, particularly as she was gesticulating at me to do so right in front of the police station.

I did, though, raise my hand whilst looking at her through my rear vision mirror and call back at her loudly with the supercilious confidence of one who is in the right and far out of earshot, “Trente degrés. Trente degrés.” In the car with me were my daughter and her friend who turned to look at each other quizzically and then back at me as if I had gone mad. It was nowhere near thirty degrees. I had meant to say trente kilomètres and the wrong words had come out. Of course it did nothing to deter the other driver who continued to mouth-off madly as she passed me at the first opportunity.

Road safety figures for 2014 in France were released last week. They showed an increase in both injuries (35000) and road deaths (3384) over the 12-month period, which was the first rise in 12 years. Startlingly, though, that mortality figure has been as high as five times greater. In 1973 the national road toll was 17,861. That year the village of Mazamet in the Tarn conducted a Journée Ville Morte (Dead Town Day). As a town of roughly the same population as the national road toll, the inhabitants, at a pre-designated hour lay down, immobile in the streets for ten minutes in a stunt to raise awareness of the seriousness of the situation.

I remember several of the television campaigns of my youth with great clarity. Everyone, myself included loved Norm, the smiling likeable couch potato, who urged us to get off our couches, be active and give life a proper go. As schoolgirls we walked miles with our rubbish bags picking up as we went to support the Keep South Australia Beautiful or KESAB campaign, long before Ian Kiernan’s Clean Up at Sydney Harbour led to an Australian Clean-Up day. The Slip, Slop, Slap seagull, Sid, changed my sun habits with my children and brought about school ‘No Hat, No Play’ policies. But, it was the ‘Drink, Drive, Bloody Idiot’ advertisements that I remember the most. They were shocking. 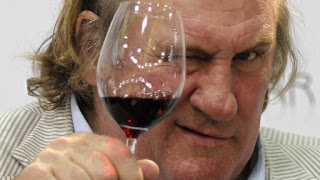 The first time I was asked to blow into the bag at a random breath testing station I was like a nervous schoolgirl. Actually, I wasn’t long out of school and probably looked like one too. I knew that I had had nothing to drink but I still wondered if the indicator would collaborate my story or if I would be appearing in the Launceston Daily the next day. This fear had sane, normally mature male friends stopping their car in sight of the breath testing unit, flinging open all car doors simultaneously and running for the hills, only to be scooped up by the police waiting around the corner and shamefacedly brought back to front the bag-touting ‘men in blue.’

Between 20 and 30% of fatal accidents in France and Australia can still be attributed to alcohol. Back in November 2011 the then French President, Monsieur Sarkozy announced that, as of spring 2012, every car would be required to carry a breathalyzer kit. The announcement came during the presentation of the ‘Echarpes d’or’ or ‘golden scarves,’ which is an initiative of the Road Safety office and rewards communities for their attempts to improve road security. The efforts recognized can be for improvements in infrastructure, campaigns to educate or raise awareness of road safety issues or promotion of the respect of the road rules. 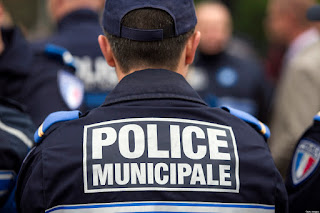 Of course, the requirement to purchase and leave a breathalayser kit in every car created debate and discussion. An opinion poll conducted by our local paper, which prompted nearly 3000 people to vote gave an outstanding ‘no’ to the idea. There was the usual skepticism concerning it being an excuse to revenue-raise. Then there was this - “The drunker I am, the faster I drive so I am not on the road as long and therefore am not as dangerous to others.”

The latest road accident figures also indicated an increase in the number of cyclist deaths. It is still not compulsory to wear a helmet when out riding in France. But, time has rendered me complacent. Initially, I would point out to my husband every non-helmeted bike rider with an exclamation of surprise, bordering on contempt. After years of living in France I don’t think I even notice the lack of protective headgear anymore. Sadly I tend to register the clothing and style of the Frenchwomen who manage to ride, without a helmet, but with high heels, scarves and mini skirts and not look at all sweaty or dishevelled. I am usually more distracted with jealously wishing I knew how they did it. 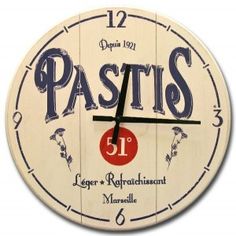 Posted by But you are in France, Madame at 04:29 No comments: