Planning our year in France 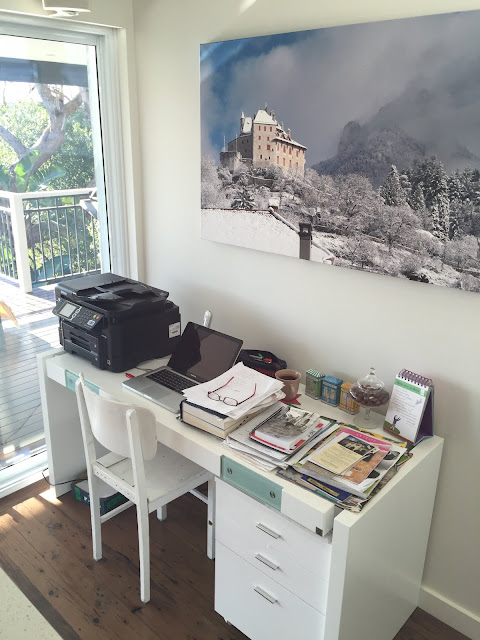 We have been back living in Australia for a few years. Whilst, in a practical sense, we feel less present than when we were living in France, we are still very much attached. Physically, we have our French village house, which is also our business as it is rented out for holiday lets; emotionally we have our friends, our photos and our memories.

At various points around our current house we are reminded of our French story. Above my desk is a large canvas photo of the view up to the castle that we had from our balcony and an old postcard holder in our living room makes an excellent display for our French photos. Even curled, I still love stopping, flicking through a packet of images and reminiscing.

Plus, we have our hopes and plans for the future.

Strangely, I don't recall the exact moment that we decided to uproot us all and try living on the other side of the world, knowing no-one and only one and a half of us knowing the language (my son was only six...he's the half). But, I still remember quite distinctly the moment that we set our sights on living in Annecy.

Up until that day, we had done a lot of talking, hours of Internet searching and written many long lists of things to do and to decide. We knew by then that we wanted to be close to an international airport, not too isolated but not in a big city, be in an area where we could truly integrate with French speakers and preferably where skiing was an option.


It was mid-afternoon and we were on holidays in Adelaide. The fact that we were on holidays is probably significant as it meant that my husband and I were actually together at that time of day. He had packed a Lonely Planet Guide to France and was flicking through it. The book opened to Annecy and he started reading, he then looked up at me and asked if I knew of the town. Hmmm, did having a page of the Year 7 text book that I used to teach French, dedicated to the beautifully clean Annecy Lake, count?

Finding schools and accommodation seemed to be the most urgent tasks and we had several false starts before we came across a school in Annecy that had both a primary and secondary section, and was able to accept all three of our children. One thing organised and still so much to do. From one day to the next, I declared to a girlfriend that I had come to an important, perhaps surprising, decision - that I was pulling the plug on our year away. Packing up our house, organising our extraction from our entire Australian lives (think insurances, subscriptions, schools, work, clubs...), balancing our finances to be able to go for such a long time, being so far away and intimidated by doing everything in French, even the task of buying light enough suitcases to give us more flexibility with our flight weight allowance, was huge. If I then added to that the bureaucratic expectations of living in France, the difficulties I was having finding suitable accomodation, working out the best way to transfer money (the exchange rate was at a 10-year low) in addition to school runs, normal household chores, birthday parties, confirmations, health checks...it was just overwhelming.

The next afternoon I went and bought our airline tickets.

But, in reality, Annecy was a gamble. I had heard good things about it, that was all.

Last weekend, I wrote an introduction to a book that I was preparing.

Churchill was not the only one to think this way. We first stopped to explore the village of Talloires on the Annecy Lake a couple of weeks after our arrival in France. It was an overcast day and the lake’s blue shades, about which Mark Twain had written so beautifully, had been replaced by reflective hues of cloud grey. The mountains were slightly obscured and the streets were empty. A photo of me strolling along Rue André Theuriet that day turned out to be strangely portentous. There, in the background, long before thoughts of purchasing or living permanently in France had entered our heads, was our house; the one that we ended up buying many years later. 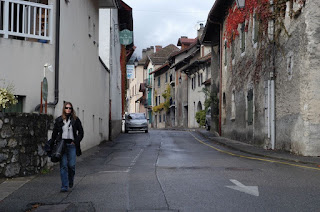 Our initial infatuation, over the years, turned into a constant love affair. Living there, we had experienced highs and lows, some predictable and some not-so, but it was the feeling that we got, the lurch in the pit of the stomach, the fleeting reflections that lingered, the sounds, fragrances and beauty that kept on floating by well after our return to Australia that convinced us that we, like Churchill, like Mark Twain, Cézanne, Gide, President Nixon and Napoleon 3, to name just a few, had found a special place in Talloires.

“Then at the end of an hour you come to Annecy … which breaks the heart in your bosom, it is so beautiful.” (Mark Twain)

I am sure that we could have found other places in France that would have suited us just as well as Annecy. But, to feel so deeply we had to go and let go in the first place.