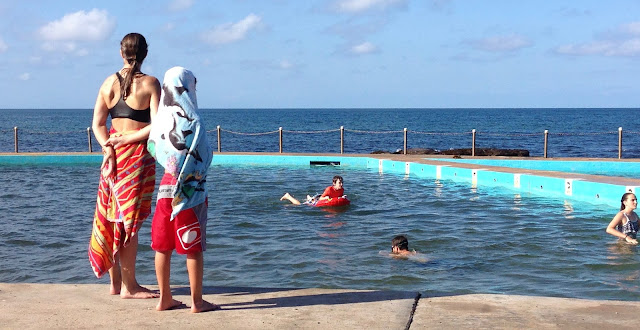 I had finished my morning swim at the rock pool and was enjoying a few moments of peace, sitting on the slatted wooden bench at the end of one of the lanes. To my right, a long stretch of pristine sand; to my left, a rock platform abutting a cliff, from the top of which I knew there were panoramic views up and down the coastline. I registered that there were sounds ... gulls, waves... but they were not intrusive, just faint, familiar background noises. Unlike Mediterranean beaches, this beautiful place was not crowded, I had not had to pay and there was not the slightest indication that I was in reality only kilometres from the busy Sydney CBD. 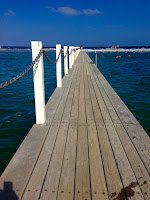 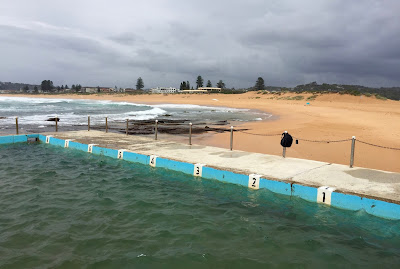 A lady came up beside me. We exchanged the inclusive smile of early morning swimmers and she got on with the job of readying herself; goggles, swimming cap, towel ready for the exit from the water. An elderly man swam up to us both and mid-turn, he addressed her briefly.

"Hey, Dad", she answered back, before he disappeared and she slid into the water beside him.

I watched them both for a while longer and then headed back to my car, reflective, and a little sad.

My own father was hundreds of kilometres away. There was no chance of us bumping into each other during our morning rituals. 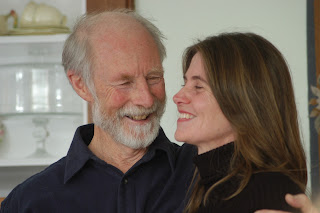 We have not had that privilege since I left home for my first teaching job, several decades ago. Then, I gave it no thought. In fact, I was driven - to leave, to explore the world, to do things differently, to experience - and what I left behind was simply unavoidable collateral damage.

My oldest daughter left home a couple of months ago. She was just about to turn 19. Since then, she has thrived in her new independent environment and I am proud, very proud, of the choices that she is making. Of course, I understand better what my own parents might have been feeling when they put me on the Overland train from Adelaide to Melbourne, with my one suitcase filled with a limited collection of clothes and novice teaching materials.

My husband and I chose to go and live in France with our children. We chose to absent ourselves from family and friends and struggle through unfamiliarity and loneliness. Several years later, we also chose to come back to Sydney. For us it was another new city, another set of challenges. We were still a long way from my family.

But, despite the occasional twinges of regret about how life could have been lived differently, closer to my first home, closer to my parents and sisters, I am witnessing for myself the benefits of the lessons that my children have already learned from the choices that we have made for them. What are they? A deeper awareness of more than what would have been their own little world; an interest in people, that allows them to want to communicate with others, a desire to do, to see, to experience, to be independent and to know better how to cope when times are tough.

What is interesting is that my parents chose to take myself and my three sisters overseas to live for a year when I was twelve. The person that I became grew from this experience ... just like my own children are growing from theirs.

Does this mean that in years to come, I will be far from them, wishing that I, too, could glance up at them from the water, as our daily paths crossed?

But, I have made a choice to give them the freedom to see the world differently. I can't go back on that now. 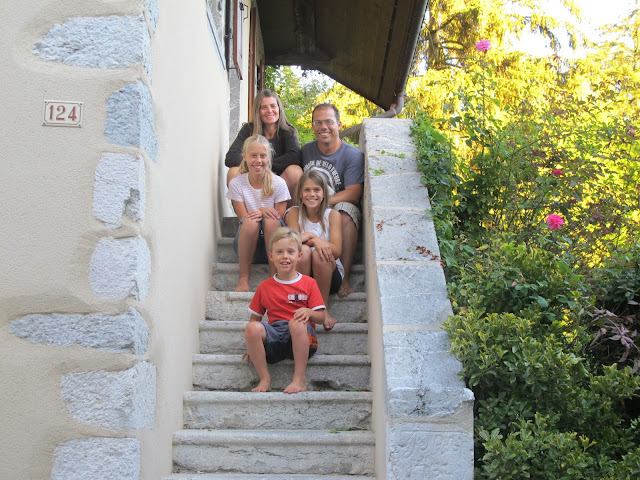