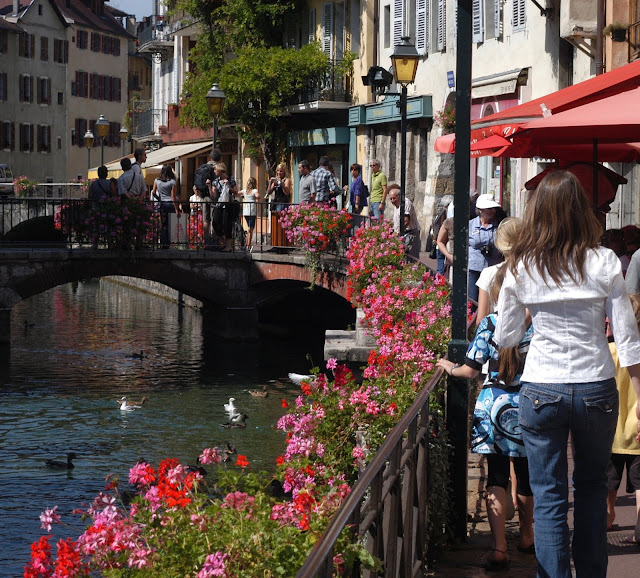 No, this is not an announcement or something that I've been keeping from you. I have to learn Italian - and not just a few random words, or sentences that will get me a shot of coffee in the morning.

Let me hasten to add that this was always my intention BUT it would have been nice to have been forewarned before I spent hours preparing my application, paying copious amounts of money getting all manner of certificates and having them apostilled and translated, filling in forms and then paying even more money into foreign bank accounts that a B1-level language test would be mandatory before I could be granted Italian citizenship. Was this information anywhere to be found on the website detailing the process? No. When did this new rule come into play? Early January ... this year!

So, just for good measure...

Io mangio una mela - no, actually I am not eating an apple, but I am pretty happy with that phrase

Io sono una donna - but a pretty worn out one at that after this latest revelation.

We did have some success, though, at the Italian Consulate Offices this morning where I was greeted with this new linguistic challenge - four new Italian passports for my husband and children. 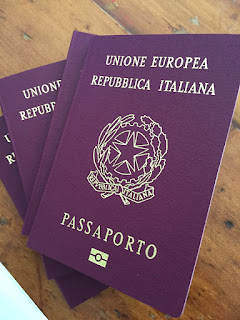 It takes me back ten years to the very up-and-down period before our departure for France. Re-reading the small excerpt from 'But you are in France, Madame' (below) never fails to make me want that all over again. The busyness, the tiredness, the trepidation, the worry that our passports wouldn't come through on time or that we wouldn't have enough money, the awareness that I would need to step up as the only real French speaker, the uncertainty over housing, schooling, work ... I'd take all of that again in a heartbeat knowing what I know now. If you are even semi-seriously contemplating a family adventure like ours, do it ... just do it. And, if you are hesitating and need someone to bounce ideas off, send me a message. I'm always very happy to help.


The final weeks before setting off disappeared in an exhausting madness of attempting to keep the lives of our children relatively normal, while completing the ever-expanding list of things to do. The children themselves, aged at that stage 6, 9 and 12, were in a blissful state of incomprehension about their future in a far-away, friendless, non-English-speaking environment and caught up in the excitement of having unusually indulgent parents—both of whom were constantly behaving rather erratically, forgetting to put them to bed or into the bath, and saying weird, unheard-of things like, “Help yourselves to whatever you’d like in the pantry”. And then distractedly, “Certainly”, to their quizzically opportunistic, “Including the lollies?” follow-through.

Even the full shelf of lollies, left over from the interminable round of ‘parties with party bags’ that the children had attended, was fair game. Surprisingly, my furtive nightly raids on their bags had not contributed to a significant reduction in the mountain of Minties, Smarties and chocolate bars. The children were obligingly happy to help change that and equally as happy to have packets of chips or spaghetti out of a can for dinner, with an ice cream chaser for dessert. How lucky it was that I could escape the healthy-eating, good-parenting critics, as it all took place in complete anonymity. 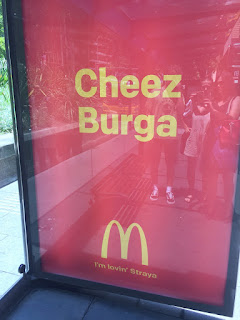 PS I'm not a McDonald's fan, but the billboard next to the bus stop, on the way home, was an emphatic full stop to the whole morning's linguistic story.

And, why, you might ask, am I even going down this Italian passport route? One unfriendly-to-me word - Brexit.

We had all been given bright yellow rain jackets to put on; the sort that I wore decades ago over my school uniform but under protest. Visibility was a little further than the railing on the boat, but not far enough to take in the Jurassic Park-lookalike islands, hiding out there somewhere in the fog and slanting rain. Instead, from my position under cover, I focussed on shaping the stiff, brightly coloured material, which I had stretched over my knees, into channels, and watching the water gush through them before cascading over my bare legs and onto the deck. 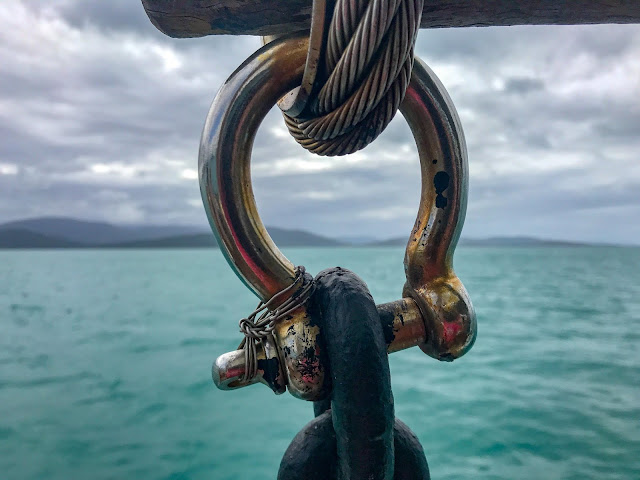 We were in the Whitsunday Islands and, when booking our day's sailing and snorkelling adventure, I had had to put aside my fear of being in the water with deadly jellyfish and sharks, by focussing on the white sandy beaches in the publicity material, the Great Barrier Reef that I would get to see before it whites-out completely and the anticipated pleasures of a gentle breeze in my hair, the sight of an occasional bird and the singing and sighing of the tall ship. I hadn't envisioned dreaming of a hot bath at 8.30 in the morning. 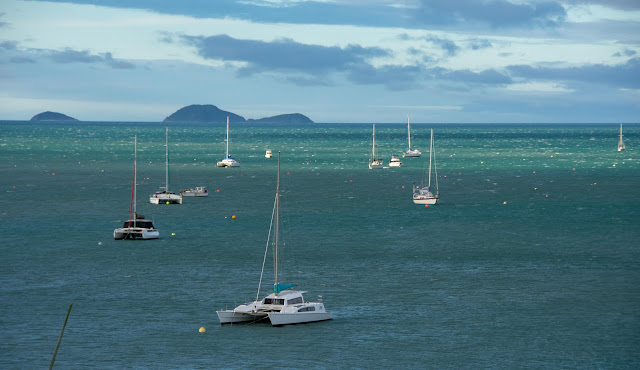 She had a history this girl and I was impressed. Could the moral of my story be that experience counts, I wondered, as I listened to the crew distract us from the elements by recounting The Derwent Hunter's exploits? Lovingly, and expertly, crafted, she had survived mountainous seas, a trip to Antarctica, racing in a tall-ships' Sydney to Hobart, an inglorious period as a television-series prop and, intriguingly, running packages that probably could not have been posted at a regular post office. Her maker had seen 83 years before he began work on her and, would that he be alive, to hear of her 70-odd-year journey and know that she had surmounted each and every challenge that had been put before her. I know that I felt proud of her achievements and I had nothing to do with her conception. 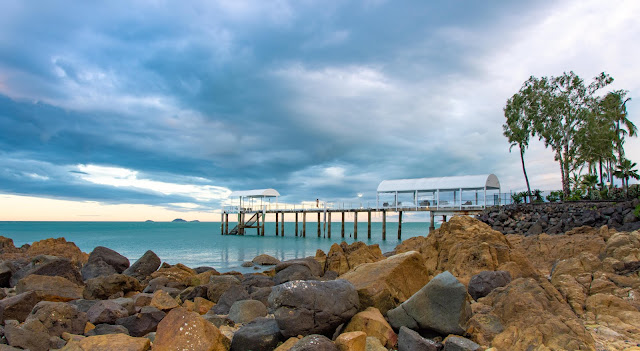 The nearly all-female crew, too, had me beaming. Is it because I am a Mum, is it because I am a teacher or is it just what we should all be delighting in...but for days afterwards, I could not stop talking about the friendly, personable, efficient and knowledgeable way in which they guided us through the day.

In the middle of the 'show-and-tell' session on our way back to harbour after snorkelling and lunch, the clouds lifted, the sun shone and, when all sails were hoisted, the engine was switched off. Calm, peaceful, warm, blue...until we spotted another tall ship.

"It is always a race when there are two boats on the water."

I laughed and leant back to enjoy the spectacle, surmising that so often life's lessons come at you in the most unexpected moments.

PS We are not in France this Australian summer and, as much as I miss Annecy, the snow and rugging up against the cold, this beach life, I have to admit, has been a lot of fun!

If you are a new reader of this blog, and would like to discover how we lived our French family life, here it is - 'But you are in France, Madame' (available in print or e-book).

It seems that it isn't about the quality any more...and I like that. 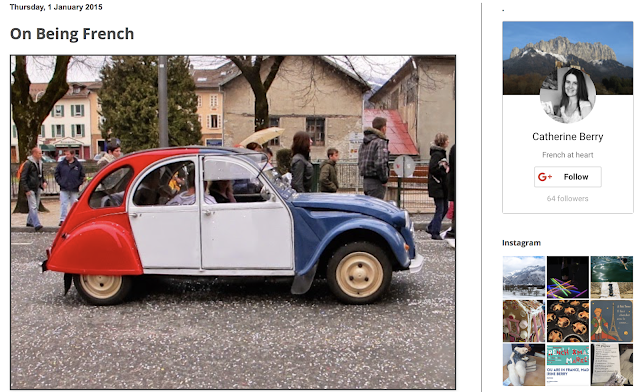 I was late to social media and was following instructions when I hit publish on my first blog (picture above), started a Facebook account and learnt about Instagram. Sceptical, I figured that it was worth a shot as marketing was really the name of the game.

What? I was interacting ... on social media, and not in a 'flick, click and onto the next' sort of way. I was genuinely interested in the stories that I was looking at. It occurred to me that I knew these people in the photos. I was not a friend, nor was I attempting to become that, but I was connected all around the world.

Curious, I looked back at my own Instagram photos. As far as quality goes; some are ok, some are very average, but the little waves of hello (likes) and the occasional comment always happen. It seems that it actually isn't about the quality anymore, and I like that. Of course, when I post classically beautiful scenes of France, I can count on more interaction from the other side of the screen, but mostly from people that I have never heard from.

The French word for an acquaintance is une connaissance from the verb connaître (to know). That was what sent me to sleep last night; reflecting on the pleasure that I get from knowing my worldly connaissances and receiving frequent snap-shots, updates if you like, of what is happening in their worlds.

Friends, in an old-fashioned pen-pal sort of way. So nice.

For more of our French story - Kindle or print - click here But you are in France, Madame

Posted by But you are in France, Madame at 18:02 No comments:

I had a lot of fun doing this interview with Lise. Most of my work these days is in English, but Lise (Let's Speak French) teaches French and so we decided to do the interview in French as an extra bit of practice for her students. If you have the time, I'd love you to have a listen. For those who are just starting out learning French, there is also a transcript of our conversation to use as a guide.

Posted by But you are in France, Madame at 22:48 No comments:

A catch up in Melbourne? 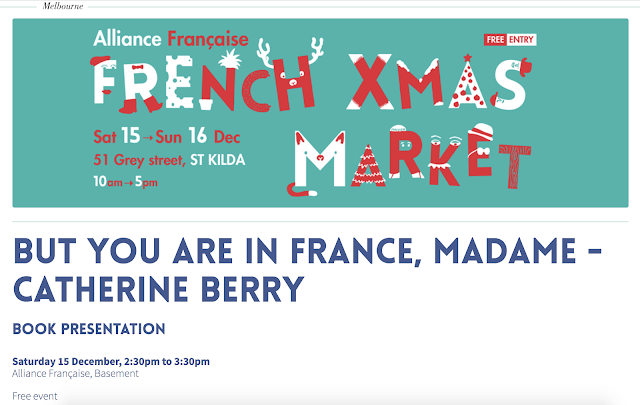 A bit of publicity...If you are in Melbourne and thinking of heading to the Alliance Française Christmas market (51 Grey St, St Kilda) on Saturday 15 Dec, I will be in the basement at 14h30 giving a talk on our French life, which led to the writing of my book and the purchase of our French home. Perhaps you are thinking of something similar? Maybe I will see you there? I will leave plenty of time for questions.

It is a free talk, but you do need to book. Link here.

PS Copies will be available for sale on the day, but if you would like to purchase beforehand, hop over to Amazon, where ‘But you are in France, Madame’ can be purchased as Kindle or print options. Perhaps one for a Francophile friend, one for you? 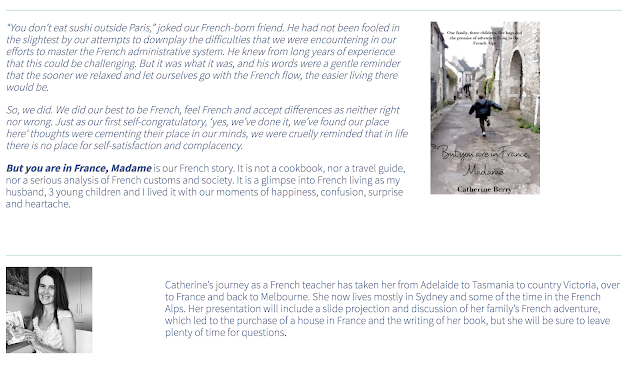 Posted by But you are in France, Madame at 18:15 No comments: