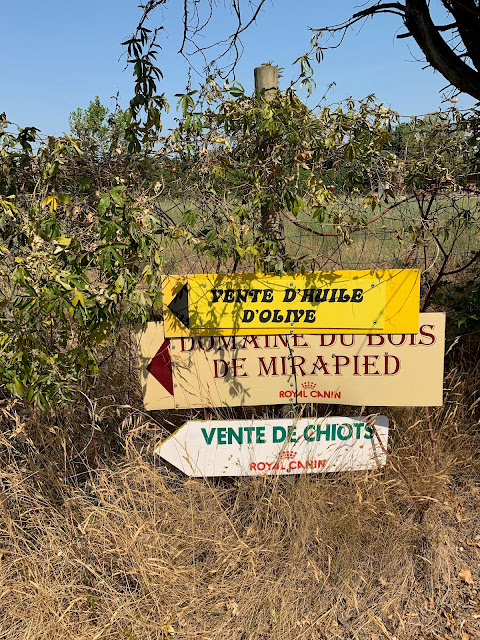 Our first Tour de France seems like a long time ago. Then, as Tour novices, it was exciting, colourful, loud, hot, fun...exactly as it was this year. And judging from the ages, stages and antics of those around us, we are not the only ones to feel like this.

It is as much the rhythm of the season, the return of a good friend, the thrill of the catch and the allure of a day out as it is the cycling. Roadside and pre-arrival of the cyclists, the holiday vibe is as taut as the faded lavender still swaying sporadically in the Provençal fields, and the jingles, carried poorly through the loudspeakers on the floats in the advertising caravane, work just as magically as any smooth, slinky nightclub sound. In tune with the mood, we dance, wave, cheer and dive manically for the must-have sachets of laundry liquid and mustard sauce or the key-rings, pens, hats and, crowd-favourite, Haribo lollies thrown at us by young, pretty and pretty resilient Tour girls and boys. 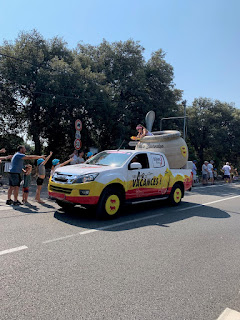 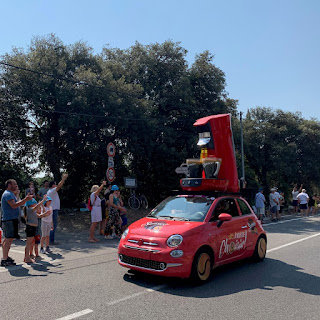 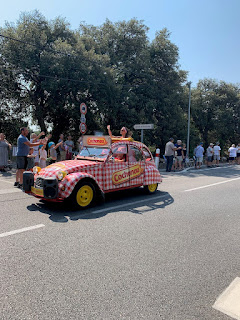 Just a smidgen of competitiveness infiltrates the good-natured event:

"Ils sont à vous, Madame?" I was queried after Monsieur-across-the-road scurried to join me and my advantageous position, and eye off my pile of goodies.

But no fear of fashion faux-pas. We all slip on the oversized t-shirts and slap on the one-size-fits-all polka-dot caps, unconcerned that they make of us a giant, manipulable, cost-effective advertisement. Excepting perhaps the hot-but-not-bothered policemen and the two suave individuals who draped their t-shirts elegantly over their shoulders after having carefully undone and checked the top button of their shirts...after all, the television cameras were everywhere.

For more little excerpts and images of our French life, you can find me on Instagram @butyouareinfrancemadame or here on Amazon (print or ebook available for purchase) 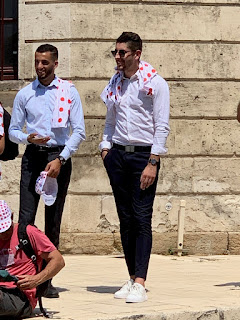 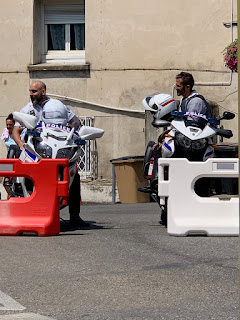 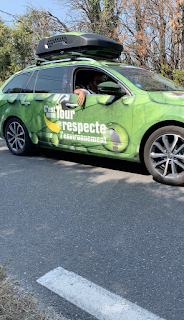 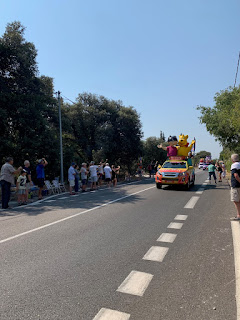 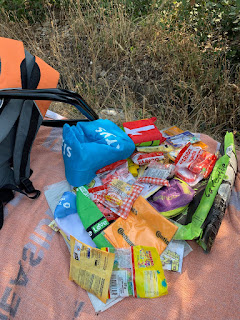 Posted by But you are in France, Madame at 20:42 No comments:

No Beef with these bikes 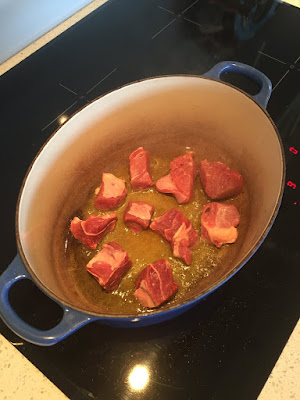 Here I go again. Talking about food when I have no right to do so. But, in honour of the Tour de France - a race that I have come to know and love over the last ten years - we made a French meal. Actually, we never need an excuse for this, and I use the term 'we' loosely. I watched, took photos and sampled the red wine as the beef stew (boeuf bourguignon) was being put together. 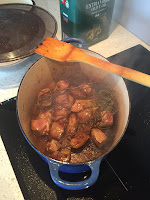 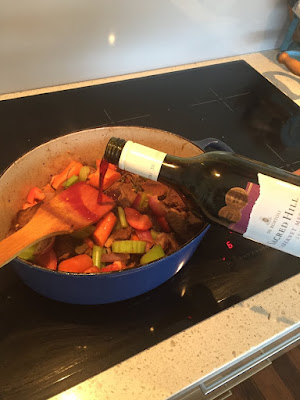 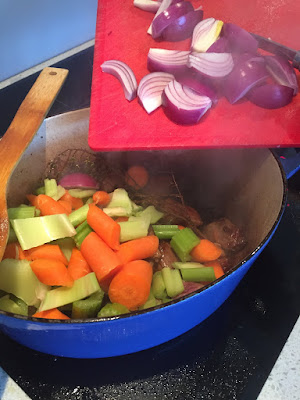 But, back to the bikes. In 2009, we were in the final months of preparation before our family adventure (which would take us from living in Melbourne to living in France) when the Tour passed through Annecy. I stayed up that night to watch the SBS coverage on Australian television and, as my interest to that point in the Tour was scanty and my knowledge sketchy, I didn't understand a lot of what was going on: the idea of teams working together for one lead rider, the different specialists within the teams, the terms and duration of the Tour, the names of the riders etc. was all unfamiliar territory. I can't tell you who won that stage, where the race went after Annecy and had to look up the eventual overall winner (Contador), but I can tell you that that night was thrilling. It was a turning point of sorts, as it had been suggested to all of our friends that they, too, should stay up late to see our future hometown. After years of planning, there was no alternative but to finally walk our talk...and go.

I now feel like an old hand. Not only did Annecy again feature this year as a start town for the 10th stage, Taste Le Tour with Gabriel Gaté visited Le Père Bise in our village, Talloires. Go to Series 14, Episode 10 for more.

***Purchase your copy of 'But you are in France, Madame', which takes you with us on our French adventure, at Amazon, here *** 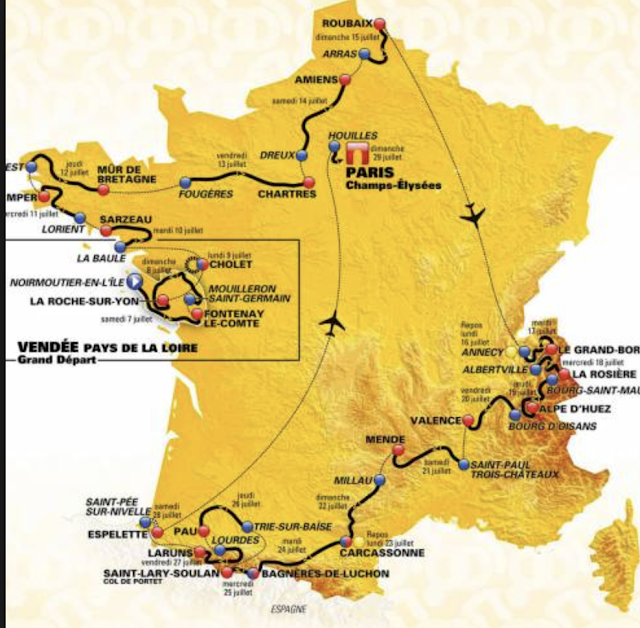 Below, the original article that I wrote after a lovely, lengthy email communication with 82 year-old British cyclist, Peter Newman. As you will read, Peter and three mates did a cycling tour of their own in 1957, which crossed paths with the actual Tour de France. They had none of today's tools to assist with their preparation or their day-to-day comfort, making what they did a real exploit in my mind. Read on to discover more, or if it is easier to read the web version;  here it is - web article in France Today. 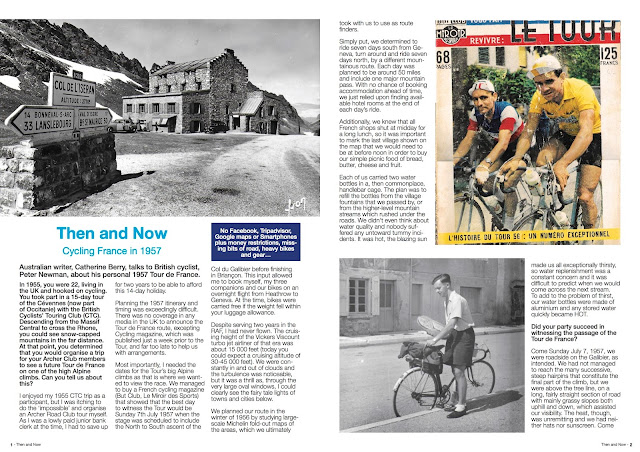 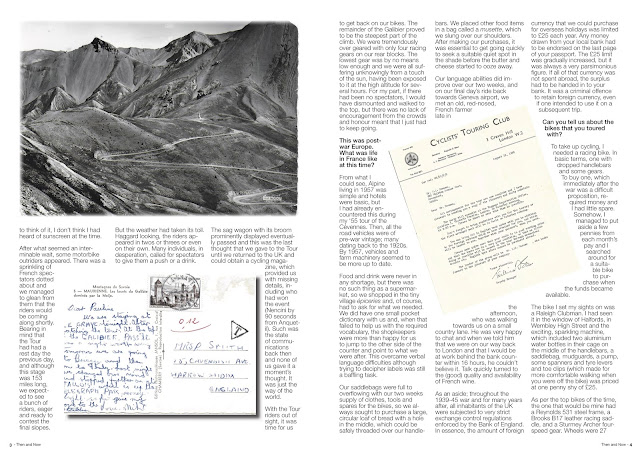 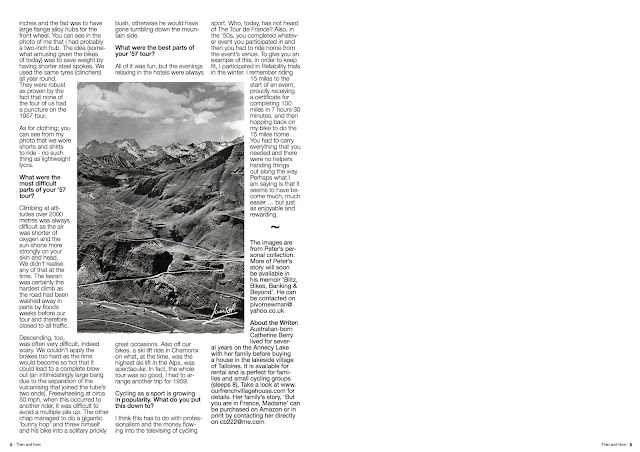 Thank-you to Peter for his indulgence with the clarification of details and the time that he gave to answering my many emails. It was lovely to get to know him over the miles.

As always,  if you would like to read more of our family story, 'But you are in France, Madame', here is the Amazon link for a Kindle copy.
If you would prefer a print copy, an Affiliate link is to be found in Kristin Espinasse's French word-a-day blog. A purchase here costs no more and would be so very much appreciated by us both.

Posted by But you are in France, Madame at 13:13 No comments: 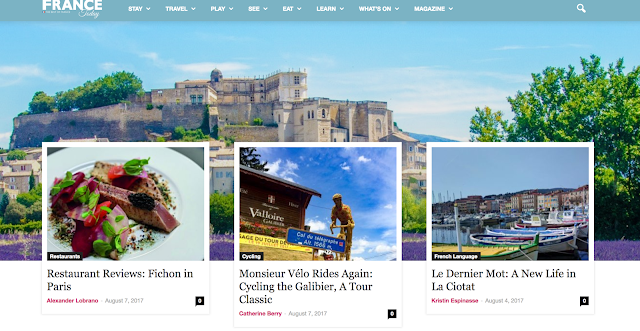 For those of you who are new to the blog, let me introduce you to Monsieur Vélo.

His first appearance 'Just say it's Monsieur Vélo' was the result of a chance meeting whilst out on a bike ride, at the top of Semnoz, near Annecy. On this occasion, he was treated to French warmth and hospitality.

In today's France Today article, Monsieur Vélo is once again on his bike, and once again, the kind recipient of French generosity.

For my family and I, living in France, this French welcome has also overwhelmingly been our experience and for that we say 'thanks'.

Welcome to 'But you are in France, Madame' and bonne lecture!