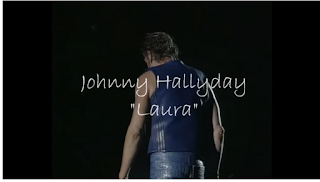 "We all have a bit of Johnny in us..." wrote Emmanuel Macron this morning after learning of the death of French rock star Johnny Hallyday.

Even me, from a country far, far away.

I encountered Johnny on my first visit to France as a young, impressionable assistante d'anglais. Everything in that year was new, challenging, exciting and terrifying in equal measures. With no money to my name, buying CDs was out of the question, but I was aware of this icon of French music. I had no real idea whether I was supposed to admire him or not, but listen I did.

My favourite song was Laura, written for his daughter in 1986.
https://www.youtube.com/watch?v=HjnwtIE74ek

In 2009, it was the turn of my husband, and my three children to return to France with me and prior to our departure from Australia, I introduced them to Johnny.

Today, like so many, I react with sadness and say chapeau Johnny.
Adieu.

PS Johnny himself used these words in relation to Jacques Chirac in 1988. A neat way for Macron to politically salute Monsieur Hallyday.