A most audible option

I wanted to have a reading done of 'But you are in France, Madame' as soon as it went into print. Initially, I believed that it couldn't be that hard and that I could just do it myself. Despite being the person most intimately associated with my story, my reading was never convincing.

Recently, Rosemary Puddy (The Book Podcast), contacted me to ask if I would mind if she did a reading of the first few chapters of my book for her podcast, which celebrates Australian women writers. I was delighted!

I received the link to Rosemary's reading last week-end. It was an overcast Sunday and I was not in a hurry to get out and about, so clicked 'play' and sat down to listen. In a scene somewhat reminiscent of the days when a family's evening entertainment was to gather around the radio and listen to the next instalment of a radio series, my family gradually all joined me. Variously, leaning on the kitchen bench, sitting cross-legged on the stool next to my desk, standing no doubt with the intention of listening in for a couple of minutes, we remained for the entire 30 minutes of the reading.

It was good. In fact, it was lovely. Our story, my children's story, read as if it were a proper piece of literature. Regardless of how it is viewed in reality, that is how it felt. Afterwards, came the memories. Thank-you, Rosemary!
If you have a spare 30 minutes to listen, make yourself a cup of tea and then follow this link to episode number 9 (you will need to scroll down the page). 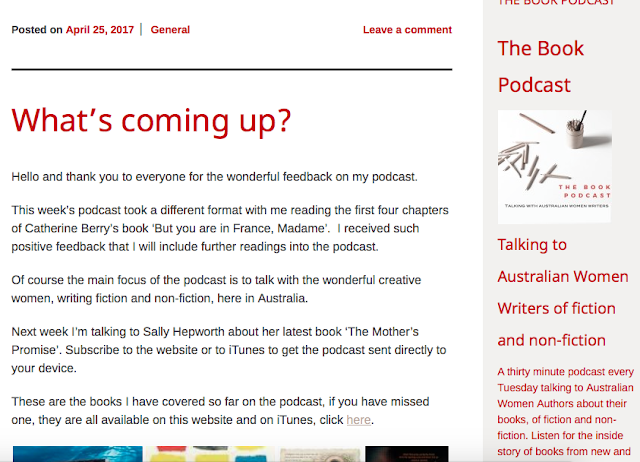 Posted by But you are in France, Madame at 22:41 No comments:

A quick trip to France with your Book Club? 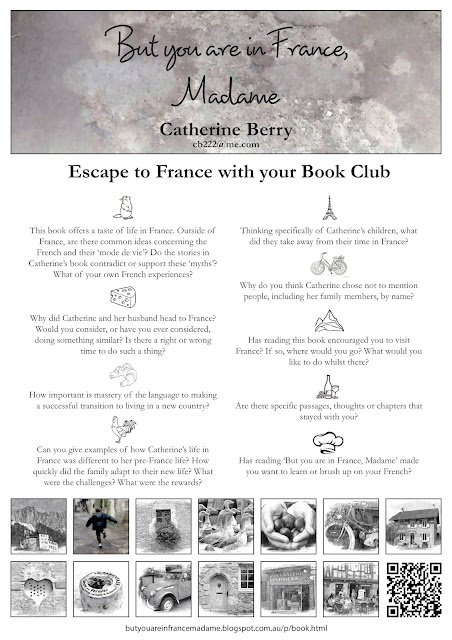 I have been asked recently to provide some ideas for book club discussions of 'But you are in France, Madame'. Where possible, I am happy to attend your book club meeting but, if you live too far away (outside the Sydney area!), I hope that the flyer (above) that I have put together might promote lots of fun and lively discussions. Contact me on cb222@me.com and I will send you a pdf for printing or distribution to your book club members.

A reminder, too, of the different purchase options (see below) for 'But you are in France, Madame'.

Finally, if you would like to continue discussing my book, bilingual education, purchasing in France or moving with your family, I would love to hear from you!
Posted by But you are in France, Madame at 22:27 No comments:

Let me fill you in on the back story to my latest contribution to France Today magazine, which is less 'travel piece' and more 'story'.

One of the best decisions that we made when living in France was to move from Giez to Menthon-St-Bernard. That's not to say that we didn't love Giez. It is a beautiful little village with a castle, a golf course, close to the Annecy-Albertville cycling track, not far from the Annecy Lake and close enough to the shops of Faverges, plus we had started to make friends and were slowly discovering the village rituals and get-togethers ... but it was just not close enough to the children's schools.

As is often the way, our circle of friends in our new village of Menthon started to widen as we were introduced to the parents of our children's friends. Some of these friendships took time to form, after all we could have been the Australian blow-ins; there for just long enough to scoop off the best of French living before skiddadling out again. Others springboarded from the first morning drop-off on the day of la rentrée, where a couple of Mums came straight up to my husband and I standing rather uncertainly on the edge of the courtyard, introduced themselves and started chatting.

Years later, one of these mothers, who by then had become a special friend, attended a dinner at the Abbey in Talloires. Seated randomly, she quickly discovered that the person next to her was Australian. Good, something to talk about...me...also Australian. One thing led to another and ultimately to an email conversation between my friend's dinner acquaintance and myself.

And no, it didn't stop at an email conversation. Let me introduce you to M. and Mme Vélo in the article above; new friends, fellow Australians and equally enamoured with Annecy, the lake, the mountains and new beginnings. 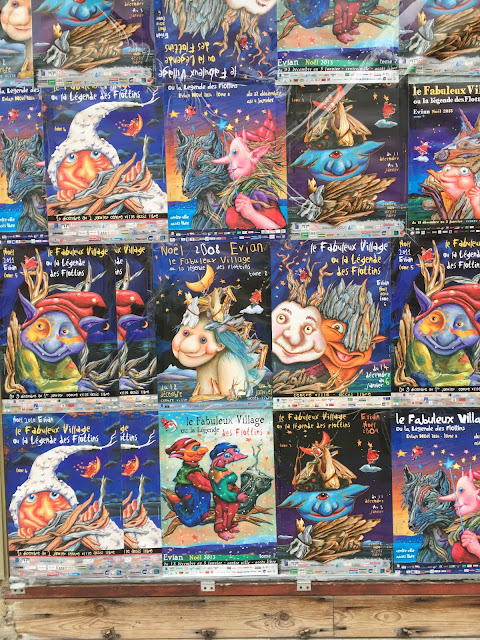 In 2009, newly arrived in France and knowing no-one, we consulted our guide books regularly for ideas on what to do and see. At the time, the name Evian made me think only of bottled water. I had no idea that Evian-les-Bains was a sizeable village (approx. 9000) on the Lac Léman (Lake Geneva) and very close to where we were living. Funnily enough, it was not rated highly in our guide book and was even considered particularly dull in winter. Prompted by an ad on a bread wrapper, similar to the one below, we went anyway. 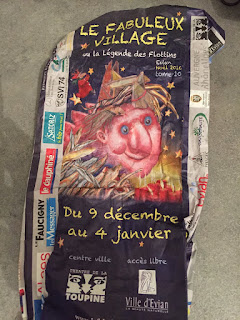 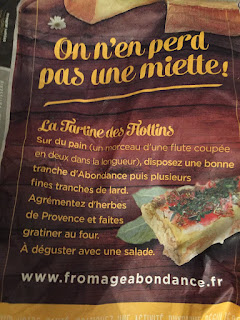 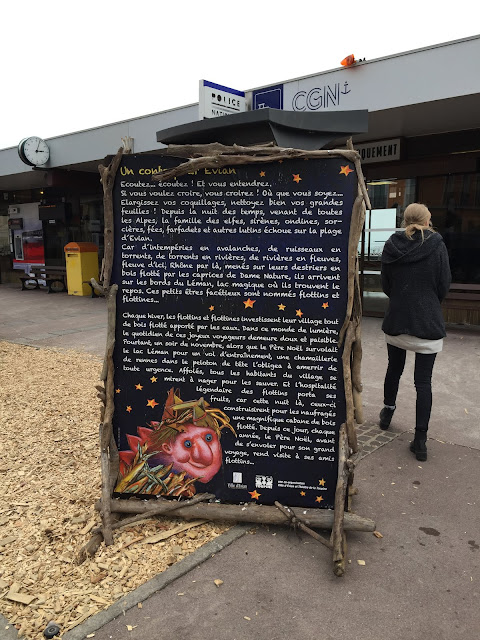 It was a cold winter's day, so cold that the spray from the lake had set solid on benches and around the tyres of cars and created dramatic temporary sculptures. It was definitely the sort of day where sitting by a fire or inside a café would have been more comfortable than strolling outdoors. Except that we were not just in Evian, we were in the Village des Flottins in Evian, where we encountered live elves and mystical (human) beings hanging out with enormous inanimate driftwood creatures. Legend has it that these warm and hospitable creatures, who arrive each year and set up their village in Evian, rescued Father Christmas and his reindeer after an altercation amongst the reindeer on a training run meant an urgent landing for Le Père Noël and his party in the waters of the Lake. He now stops in to see them annually as he is passing by. 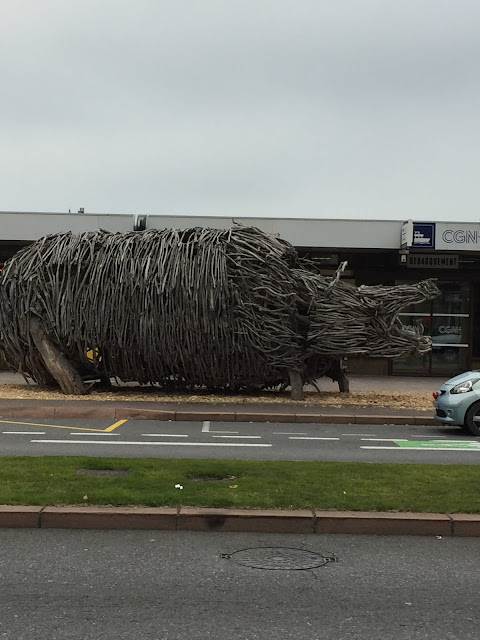 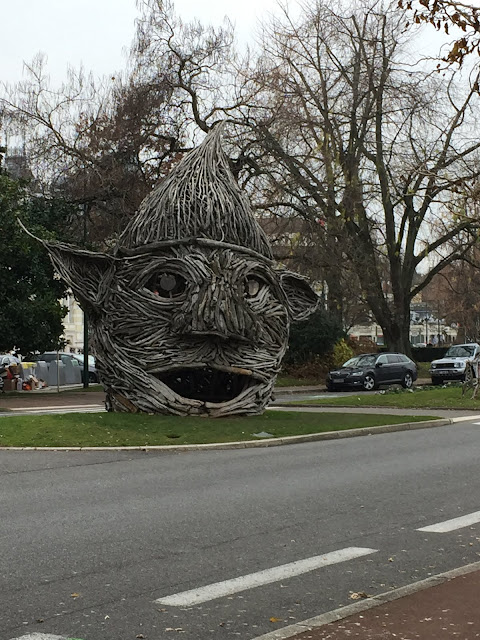 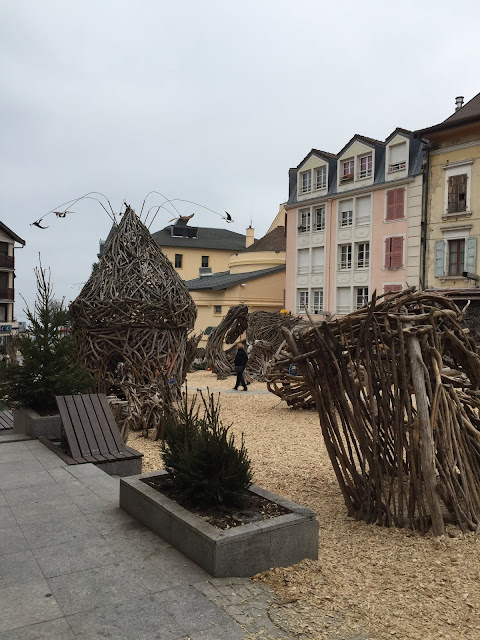 These photos are from this year's festival, the tenth, which now includes old-fashioned games for the children such as the ones that you can see in the photos below; the closest is a recycled dancing marionette; the second, made of wood has a pull-back lever which when released propels a ball up an inclined wooden chute and where the aim of the game is to get the ball high enough for it to fall through a hole in the chute. 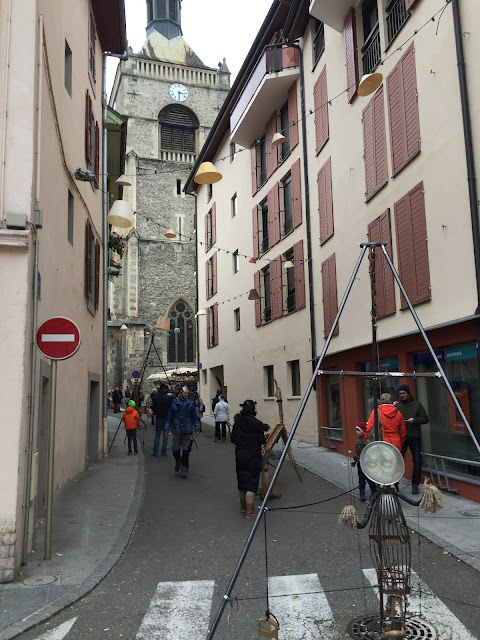 The parent-powered merry-go-round was popular with the young children. They sat in metal bucket seats and circled in a slow, leisurely fashion: a far-cry from the roller-coasters and mechanical fairground rides of today. 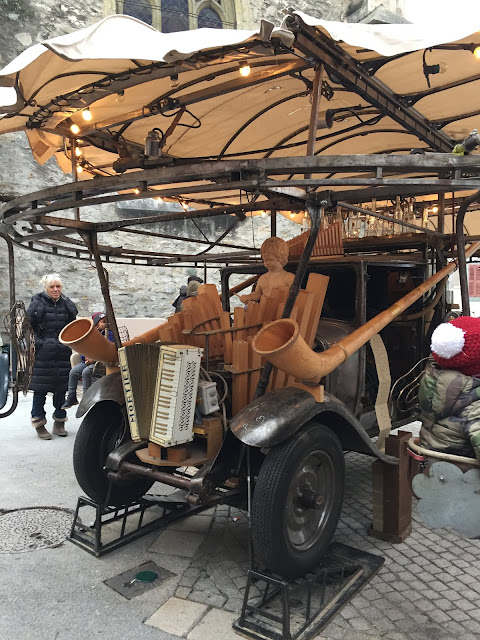 Ten years ago, there were twenty sculptures. Now, there are more than 650. These days, the festival mobilises the whole community. They gather the driftwood from the lake shore, dream up the ideas for the sculptures and then help with the fabrication. Schoolchildren and their teachers compete to invent creative sayings to write on the shopwindows in the village. All is done with the most pure of ecological intentions. 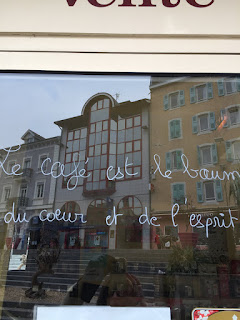 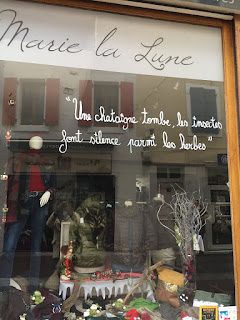 Happy to have ignored the advice of our guidebook the first year, it has now become a must-do on our Christmas calendar. If you happen to be in or near Evian in winter, pop past to enjoy this event, which proudly differentiates itself by not being a Christmas market.
In fact,
"Ici, rien n'est à vendre. Tout est à rêver et à imaginer".

Bye friendly flottins.
Until next year...
Linking today with #allaboutfrance 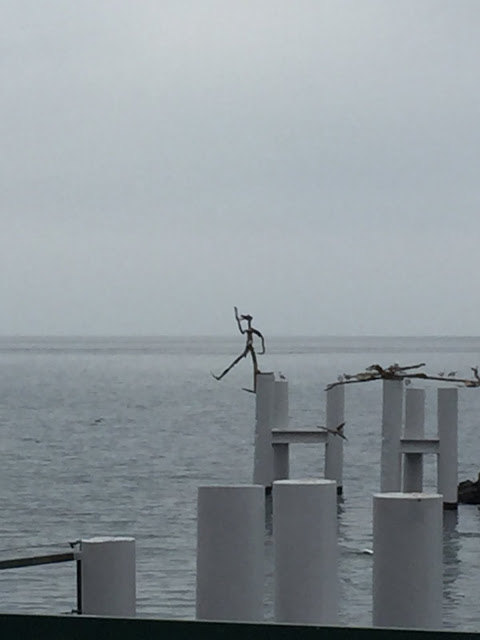 One sip at a time. Learning to live in Provence - Book review 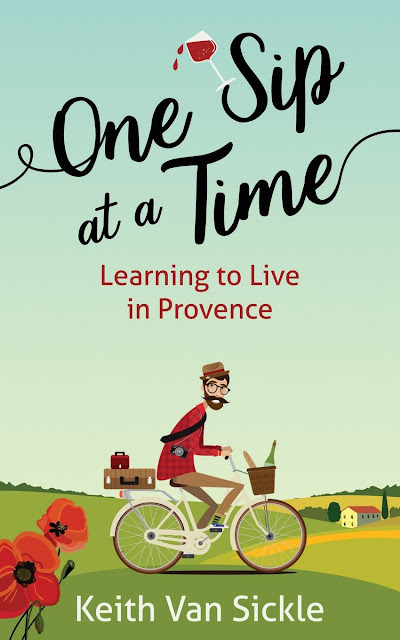 At 192 pages, this is a quick read that will be appreciated by all who live a French life, dream of French living or who are intending to travel to France. Interspersed with pretty line drawings, the chapters could stand alone as short tales or blog entries from three of Keith's visits to France. The anecdotes are told as they were lived and will draw a wry smile from those who have experienced the rigidity of French rules and the mountains of paperwork that accompany their application, the insouciant flaunting of road speed limits in France and the uncomfortable transformation of sleepy Provençal villages into tourist nests in July and August.

No barn is bought and no marriage break-down is lamented, which in itself is slightly unusual in this genre, but it is clear that Keith has an affinity with the French lifestyle and is determined to make a success of his visits. As a French language teacher myself, it was lovely to read both of Keith's determination to learn French and the way he went about this. The last section of the book is a set of resources for learners of the French language and includes how to find language partners and helpful websites, newspapers and television programs.

"Voyager, ce n'est pas seulement changer de pays ; c'est changer de voyageur, se transformer" (R. Sabatier). I like this and I think Keith would recognise himself in this quote. On a more frivolous note,  I really like the dedication that Keith's wife Val received and about which he wrote.

To find out more, you'll just have to go to Amazon here to read the book!
Keith's blog can be found here