Getting a flower - and a whole lot more 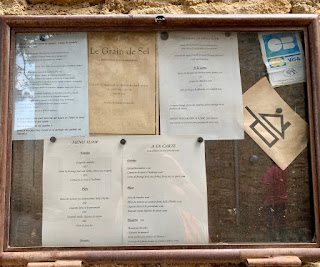 I knew I was being sweet-talked - a much kinder word than conned - and if you have watched the most delicious film of Gerald Durrell's 'My Family and Other Animals' you would recognise my own rascally version of would-be wooer-of-mother sea captain. This mother (me) was equally as un-wooable but my eye-patched, larger-than-life character still managed to make of me his customer. We had just had lunch - not under the tonnelle in the Grain de Sel restaurant  (we had not booked) - but inside (relegated but seated) although still with glimpses of the Provencal countryside.

Turning my head, and seeing just an empty bowl as the new addition to the table, I furrowed my brow, which my son interpreted correctly as 'what was that all about?'

"You just have to get ready," he replied. 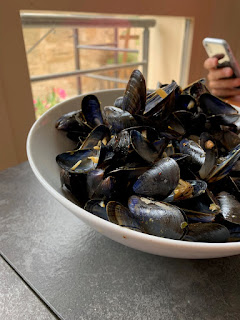 I burst out laughing. The getting ready to which he was referring was the impending arrival of his moules, and the empty bowl and little sachets of hand wipes was the signal to get ready. I really need no other little anecdote to describe his appreciative attention to the details, the rituals and the flavours of food: his Frenchness really.

But back to my bandit, oops sea-captain, I mean painter...

Having raced through the very pretty little village of Ansouis to procure our lunch seats (no use waiting until you are hungry), with bellies full, we strolled. And came upon a church, beautiful and cool. And came upon an open art gallery (entrée libre, Madame). It was a colourful exhibition and a couple of paintings had indeed caught my eye (they always do) but mindful of our budget, we were readying ourselves to step outside (hats, sunglasses, energy) when energy itself burst through the door carrying a large plastic bag. He caught my eye and, stripping down the plastic, entreated me to come and see his colours. Of course, I did. 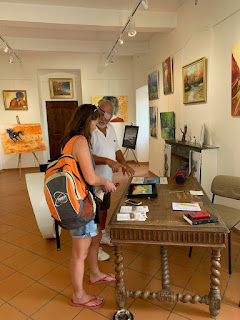 "See how when you walk backwards, the shadows under the olive trees become more defined."
And, dutifully,  I stepped backwards and nodded. As did the other two curators in the room.

"I didn't do that on purpose!" (guffaw, guffaw)

But, somehow, seduced I was and ten minutes later, we exchanged money for colour on a smaller version of our original fascination. Just a little slice of Provence with a big serving of sun-filled afternoon. I am not going to reveal to you how much I paid. No, no. But, I can tell you that I did not have enough in my pockets and yet here I am, home with my new memory...and a flower. You see, as he told me, " Je vous fais une fleur." I got a bonus...and he didn't seem to mind a bit. 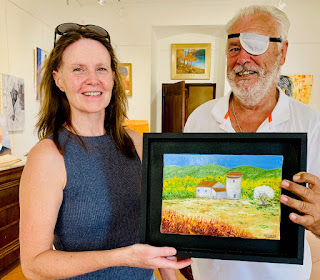 For more of our French stories, 'But you are in France, Madame': print and digital versions of the book available.

Finally, I am attempting to link today with #farawayfiles. A blogging travel community with ideas to take you the world over...including my little sojourn in Provence...